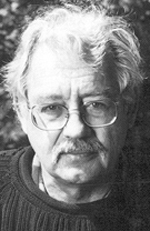 
Born in Regina in 1937, Bill Deverell of Pender Island is a former criminal lawyer and former president of the B.C. Civil Liberties Association. He started practicing law in B.C. in 1964 and was a prosecutor or defender for one thousand trials, including thirty murder trials.

Mindfield (1989) probes the CIA-financed brainwashing experiments involving LSD in Montreal's Allan Memorial Institute. Montreal cop Kellen O'Reilly, a former victim of Dr. Satorias ("the Mengele of the mind"), must dredge up her past as she dredges up a series of linked murders.

Deverell is now most widely known for writing the pilot episode for, and also co-creating, the CBC-TV series Street Legal that was based on his novel, Street Legal: The Betrayal (1995), featuring young Toronto lawyers in the offices of Robinovitch, Barr, Barr, Tchobanian. The syndicated series ran in Canada from 1986 to 1994. It has aired in more than 50 countries. According to publicity materials, Deverell's books have been translated into fourteen languages and have sold over one million copies worldwide. Deverell's thrillers, some of which are indirectly based on his cases, include Needles (1979), for which he won the first Seal Book Award, High Crimes (1981), Mecca (1983), The Dance of Shiva (1984) and Platinum Blues (1987), about the music industry, and Whipped (2017).

Not to be confused with the Michael Douglas movie Romancing the Stone, The Laughing Falcon (2001) is a light-hearted romp through the jungles of Costa Rica featuring a burned-out eco-neurotic kayak guide who seeks to rescue a Saskatoon romance writer from a fumble-footed gang of left-wing kidnappers, sending up the genres of thriller and romance.

Mind Games (2003) is about a Vancouver forensic psychiatrist, Dr. Tim Dare, whose marriage and career are disintegrating so he visits a fellow psychiatrist for guidance--while someone is trying to kill him.

In the wake of the Liam Donnelly/Rachel Marsden SFU harrassment case, Trial of Passion (1997) follows the fate of Jonathan O'Donnell, the acting Dean of Law at UBC, who is charged with raping one of his students. Trial of Passion won the 1998 Arthur Ellis Award for Best Crime Novel as well as the Hammett Prize.

First introduced in Bill Deverell's The Dance of Shiva, crafty defense lawyer, Arthur Beauchamp reappears in Bill Deverell's 14th title, April Fool (M&S $36.99), selected for the 2006 Arthur Ellis Award for Best Novel. While his new wife decides to live atop a tree in order to protect eagles from loggers, Beauchamp is again retrieved from retirement from fictional Garibaldi Island to defend a notorious jewel thief on murder and rape charges. This courtroom thriller opens: "With envy, Arthur Beauchamp watches juncos mating in the raspberry patch. A bumblebee tests a daffodil. There is lust in his garden, spring's vitality. Maybe his sap will start flowing again too, and the lazy lout below will rise from flaccid hibernation. The desire is there, but the equipment faulty. When was his last erection - a month ago? A half-hearted attempt at takeoff. But he knows he must accept and move on. We age, faculties rust. Some men lose their hair. In compensation, Arthur has kept his, a thick grey thatch."

In Deverell's novel Snow Job (M&S 2009), "Arthur Beauchamp has followed his wife, the leader and first elected member of the Green Party, to Ottawa. But he hates it there: the cold, the politics, and his place in his wife's shadow. So when a delegation of government officials from Bhashyistan is blown sky high on Bronson Avenue and the shares of a Calgary-based oil company promptly drop like a stone, Arthur is only too happy to jump to the defence of the missing suspected assassin."

In the sixth crime novel in William Deverell's series featuring defense lawyer Arthur Beauchamp, Sing a Worried Song (ECW Press, 2015), we revisit the one time in Beauchamp's career when he restlessly decided to switch sides and serve as a prosecutor. When a young man was charged with murdering a clown, Beauchamp was confident he could prove Randolph Skyler was guilty. Meanwhile his own personal life was coming apart... Beauchamp cannot forget this case, not even years later when he's happily remarried and retired to Garibaldi Island on the West Coast. The past comes back to bite him, with a vengeance.

Stung (2021) sees Beauchamp defending seven environmentalists accused of sabotaging an Ontario plant that pumps out a pesticide linked to the mass death of honeybees. The story zigzags between Toronto, where the trial takes place, and Arthur's West Coast island home, where he finds himself arrested for fighting his own environmental cause: the threatened destruction of a popular park. The Toronto trial concludes with a hang-by-the-fingernails jury verdict.

In 1994-1995 Deverell served as Chair of the Writers Union of Canada. He is the recipient of the Arthur Ellis Award and the Dashiell Hammett Prize. He has also resided near Quepos in Costa Rica.


First introduced in Bill Deverell's The Dance of Shiva, crafty defence lawyer Arthur Beauchamp reappears in Deverell's 14th title, April Fool (M&S $36.99), recently selected by the Crime Writers of Canada for the 2006 Arthur Ellis Award for Best Novel. While his new wife decides to live atop a tree in order to protect eagles from loggers, Beauchamp is again retrieved from retirement from fictional Garibaldi Island to defend a notorious jewel thief on murder and rape charges. Deverell lives on Pender Island and near Quepos in Costa Rica. 0-7710-2711-7


Having won the 2006 Arthur Ellis Award for his novel April Fool, William Deverell has again brought his lawyer protagonist Arthur Beauchamp out of retirement for Kill All The Judges, a title that harkens back to Deverell's Kill All The Lawyers, published in 2001.

Deverell's 15th book opens with a deranged court clerk who fires a pistol at a presiding judge but the intended bullet is taken in the heart by a police officer who heroically jumps in its way.

This incident is creative non-fiction, a story within the novel, written by one of its main characters. As the title suggests, there are several judges who meet their demise in the story. One succumbs to food poisoning from eating a portion of tainted duck a l'orange, another vanishes off a wharf, and a third's curiosity mysteriously ends his life.

Arthur Beauchamp is asked to step into the main trial in the novel at the last moment (after much resistance on his part) to act for the accused in the murder case of a judge who may have suspicious ties to the federal government in Ottawa.

In typical Deverell fashion there is plenty of humour that threads its way through this novel. Felicity, who desperately wants to be a poet, speaks in nearly perfect verse tones. "Just like a greeting card!"; Beauchamp says.

Some butter ends up on the fly of a man's pants as result of a little under the table accident, and poor Arthur discovers incriminating evidence in his grandson's possessions. Other hot evidence is found in the local community centre.

The novel has its tense moments, too, particularly during the trial of the accused. A near-sighted retired theatre diva is asked to identify a suspect from the witness box. She is not able to see past the end of her nose and must make her way slowly around the silent room. Every character who has raised suspicions throughout the novel is sitting in the courtroom following or avoiding her gaze.
Many of the memorable characters that joined Beauchamp in April Fool return here and Deverell presents his characters as if they were old acquaintances or new friends. Beauchamp fans will remember lawyer Brian Pomeroy, Margaret Blake (the love of Arthur's life), crabby centenarian Winnie Gillicuddy and Nelson Forbish, the ever-prying-for-details editor of The Bleat, to name just a few.

Margaret has moved from saving eagles to wanting to stretch her political aspirations nationwide. Poor Brian Pomeroy has become tired of his profession and the trials of his everyday life and sets off on a different path.
Wentworth Chance, who works with Arthur, is a new character to Beauchamp mysteries-young, green and keen. He adores the legal profession
and aspires to follow in Beauchamp's footsteps. Chance plays a big part in this novel, and this reviewer hopes to read more stories about him again.

Arthur remains crusty but compassionate. Like many of us, he does not know how to say "No"; and frequently wishes he had. He would rather be relaxing, fishing, spending time with his grandson or reading from Virgil's Aeneid. Is he really William Deverell in disguise? The question is part of the appeal for this series.

Figuring prominently in the story is the intersection of Main and Keefer in Vancouver's Chinatown and a posh condominium in what appears to be False Creek. Glimpses of Gastown, Maple Leaf Square and Garibaldi Island, where much of the novel occurs (or is it really North Pender Island where Deverell makes his home?) also form part of the landscape of the novel.

Kill All the Judges provides a delightful, witty and satisfying read. And the culprit...well sorry, that's a secret that must be kept.

Deverell was born in Regina in 1937 and by 1964 he was practicing law in British Columbia and continues to do so. The television series Street Legal which ran for eight seasons on CBC-TV was co-created by Deverell, who also wrote its pilot episode. 0-7710-2721-4