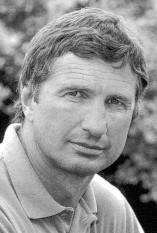 
Born December 28, 1947 in Prince Albert, Saskatchewan, Dickinson moved to Vancouver in 1977. A high school teacher in Lillooet, he won the Ethel Wilson Fiction Prize in 1991 for Blue Husbands and it was also nominated for the Governor General's Award. His first novel The Crew reprises one of his characters, Mike Kozicki, who contends with prostrate trouble, an estranged daughter, an ex-girlfriend and a strike that prevents his landscaping crew from working.

Set in London during the IRA crisis in 1974, Don Dickinson's Rag & Bone Man (Coteau) follows the misadventures of an unemployed Canadian hockey player named Rob Hendershot who is led into intrigue by his 83-year-old roommate. As a somewhat naive Canadian who went to England to play pro hockey, Hendershot is perplexed by the volatile politics of the era as he looks for love in some of the wrong places--and in an art studio. To make ends almost meet, he works as an artist's model, posing as a modern day Beowulf for the mesmerizing artist, Margaret Lowenstein, with whom he is smitten. Don Dickinson lived in London during the time period described. His first work of fiction was published in 1982.


"A few years ago, I was at a Remembrance Day service in the gym at the local high school where I teach. When O Canada quavered out over the PA system a crowd of senior boys on the back bleachers jokingly raised their right arms in a mock Nazi salute. I got mad. Later when I had them cornered in an English 12 classroom, I harangued them with the usual sermon about war, sacrifice, respect and death. They were bewildered.

"My grand moralizations fell not so much on deaf ears as on ignorant ones. My parents' war and its significance to me was to them a joke without a punchline. Oh, they listened, subdued, but uncomprehending. Not until I acted out how I discovered my dad's war wound did they take notice.

"Then-and over the years since-they asked me questions not only about 'the war', but about my growing up in its aftermath. What was it like when I was a kid? What did the war have to do with anything? So I told them stories, and with their questions came my own. How does a simple anecdote grow into a novel? Can it reach beyond itself to chronicle a time? Why is that time important? To find out I had to ask Robbie, and he told me his story." 0-00-225509-X