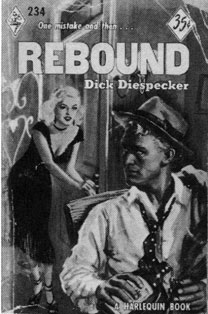 
Dick Diespecker was born at Adstock, Bucks, England. He was educated at Pretoria and Capetown, South Africa. His family moved to Victoria, BC where he published his first poem in the Daily Colonist at age fifteen. He began his newspaper career as a reporter for the Vancouver Star in 1927, worked in advertising, and joined CJOR radio at 846 Howe Street in 1936 as a playwright, news commentator and producer. He wrote over 400 radio dramas, some of which were broadcast internationally. During World War II he served with the Royal Canadian Artillcry and as Radio Liaison Officer in Ottawa and overseas. His "Prayer for Victory," written in a Montreal hotel room in 1942, was aired on networks throughout the western world. He published his first collection of poems, Between Two Furious Oceans, in 1944, and resumed residency in Vancouver. Diespecker worked for CJOR from 1945 to 1949, living at 1140 W. Pender. In 1950 he published his first novel, Elizabeth, a weak biographical novel about a South-African-born woman's journey through life, from the land of Diespecker's own roots to England and finally to Victoria, BC. In 1950 he also began working for the Province as radio director and remained as promotions manager until 1956. During this period he lived at 2804 W. 15th and at 3507 Puget Street. Diespecker's second and far superior novel, Rebound, is the story of Stoney Martin, a Vancouver journalist who, in 1950, is returning to Vancouver from Toronto by train with his second wife, Jane. By coincidence, his conniving first wife. Susan, is also on the train. As the train makes its way across Canada, Stoney reminisces, recalling his stormy relationship with the "predatory female" who tricked him with a false pregnancy into a miserable marriage. The novel paints an excellent picture of post Depression Vancouver-there is a particularly effective scene in which Stoney looks down upon the Victory Square cenotaph from his newspaper office on the eve of the outbreak of World War II. When Rebound is not exonerating Stoney's part in his sexual relationship with the relentlessly "bad" Susan, it is a fine novel with clear-eyed accounts of social problems and a deep sensitivity to Vancouver's unique character. Unfortunately the book was packaged as a potboiler of contemporary passions and Diespecker's strength as a social critic is submerged.