Denise (Deni) Dietz was born in New York City (Manhattan). She had a short-lived singing career, taught briefly at Flushing High School in New York and worked as an extra for Paramount. Her sister Eileen Dietz, who had a starring role in General Hospital, has influenced her writing career, inspiring two novels about behind-the-scenes stardom and television, The Wishing Star (2003) and Fifty Cents For Your Soul (2002).

The first book in her Diet Club Mystery series, Throw Darts at a Cheesecake, was inspired by her part-time job as a Weight Watchers lecturer. Diet club members are murdered when they reach their desired weight. It was followed by Beat Up A Cookie, dedicated to Alan Alda and concerning a group of M*A*S*H* addicts. Another mystery featuring diet club leader Ellie Bernstein is Chain a Lamb Chop to the Bed (Five Star Mysteries, 2005).

Her first Ingrid Beaumont Mystery, co-starring Hitchcock the Dog, was Footprints in the Butter, with some of the profits donated to Canine Companions, an organization that trains dogs to help the handicapped. Her historical romances include Dream Angel, Dream Dance and A Highwayman Comes Riding. Written under the name Denise Dietz Wiley, her generational saga The Rainbow's Foot includes the Cripple Creek gold rush, the Ludlow Massacre and Colorado's silent film industry. Her forthcoming mystery Eye of Newt features a contemporary witch and three witches who live in Salem. Her short story Yes We Have No Bananas is contained in the 2003 Silver Dagger anthology Criminal Appetites.

Dietz married to Gordon Aalborg, who has published romances under the pseudonym Victoria Gordon. They met online 'through a writers loop', and have collaborated a romantic suspense novel, Finding Bess, written on-line, when he was living in Australia and she was living in the United States. See entry: Gordon Aalborg.


When Deni was in the third grade, she wrote her first story, THE 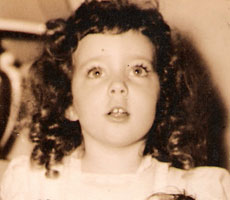 PENCIL WHO GREW UP TO BE A STUB. Although the assignment was to write a one-page story, using an ink pen, Deni wrote a five-page story, first-person...and she used a pencil. Whereupon, she received a failing grade for not following orders. Just like her heroine Jenny, in STARS OF FIRE, and her fictitious diet guru, Ellie Bernstein, Deni doesn't follow orders unless they make sense.

Years later, after Deni had enjoyed a short-lived singing career and acting career, she sat at her typewriter, flexed her fingers, and pounded out her first culinary mystery: THROW DARTS AT A CHEESECAKE, inspired by her part-time job as a Weight Watchers lecturer. In the Walker, then Worldwide, then Kindle novel, diet club members are getting killed off at goal weight and eating as if their very lives depended on it. The second book in the series, BEAT UP A COOKIE, revolves around a group of M*A*S*H* addicts and is dedicated to Alan Alda.

Switching to a computer, Deni hit the bestseller list with FOOTPRINTS IN THE BUTTER - an Ingrid Beaumont Mystery co-starring Hitchcock the Dog. She followed that success with her stand-alone, FIFTY CENTS FOR YOUR SOUL, her "reluctant witch mystery," EYE OF NEWT, and the 3rd and 4th books in her diet club mystery series, CHAIN A LAMB CHOP TO THE BED and STRANGLE A LOAF OF ITALIAN BREAD.

Married to Aussie/Canadian author, Gordon Aalborg, whom she met on-line through a writers loop, Deni, with Gordon, collaborated on a romantic suspense, FINDING BESS, and moved to Vancouver Island, where they were adopted by a chocolate Lab named Magic.

Q: You two met on line, or so the story goes?

Gordon: We were both members of an on-line writers' group, and our paths did cross, occasionally, and fiery words did fly through the ether between
Australia and Colorado, yes.

Deni: We both belong to Novelists Inc, a professional authors' organization. One day Gordon sent me a personal email. His words were...fiery...so I had to respond. That was the beginning.

Gordon: Not for a few years. Then that woman had the temerity to suggest we
ought to try and write a book together. I, of course, scoffed at such
nonsense. But she got her way, of course...girls usually do.

Deni: Since I write mysteries and Gordon writes romance, I suggested we write a romantic suspense together. Of course, I had to change all his "girls" to "women."

Q: And you did write a book together, or is that just a myth, too?

Gordon: Oh, we did indeed. It is called "Finding Bess" - her idea of a title [or maybe mine...I forget]. Indeed we wrote the entire book "on-line", half a world apart and still without having actually met. It was an...interesting exercise.

Deni: We wrote a wonderful book. Gordon came up with the title -- Finding Bess. My job was to "Americanize" the American heroine. Strange thing is, I found myself using expressions like "Bloody oath!" in ordinary conversation.

Q: More than that, surely. Didn't you...become "involved"...while writing
it?

Gordon: Well, that's Deni's story. You must ask her. She'll give you a lot
of nonsense answers, of course, but the truth of it is that I simply seduced
her. Via the internet. With words - I am a romance writer, after all. But it
was a lot of work, let me tell you. The poor girl could only spell in
American, while I am fluent in Canadian, British, Australian and American.
And she'd never been out of the continental U.S. in her life and the book
was set in Australia. There were...problems.

Deni: It was difficult. Gordon is fluent in Canadian, British and Australian, but he couldn't speak American. Nor could he understand it. I kept telling him I didn't want to get romantically involved, but the man wooed me. With words. Naturally, there were...problems.

Gordon: Well, she's a mystery author, for starters. And they're a weird mob
at the best of times and worse when in the throes of being seduced. I kept
trying to spice up the romantic elements of the book and she kept trying to
insert clues and red herrings. And we'd never - physically - met, which
rather complicated everything.

Deni: Gordon wanted to meet, in person. I had a deadline for a novella. I
couldn't just hop a plane for Australia.

Q: So where and when did you actually meet?

Gordon: Middle of June, 2000 at the airport in Launceston, Tasmania.

Deni: I hopped a plane for Australia.

Q: And did you fly into each other's arms in true romantic fashion?

Gordon: Once I'd figured out who she was -- she'd only ever sent me baby
photos during our...courtship. Typical feminine cunning.

Deni: Yes, we flew into each other's arms. I had sent him my latest dustjacket portrait. At first he didn't recognize me because I was "wearing legs" (a short skirt).

Q: And now you're married and living in Canada? Why Canada?

Gordon: Australia was too remote, from many points of view. And I have family here...I started out Canadian, after all. It seemed like a good compromise. So after her Australian visit, we both sold up, moved here, and settled into our Heritage cottage on Sept. 30th, 2000. Then we went over to Vancouver for the Novelists Inc. conference - that's the organization through which we met - and got married during the conference, which seemed appropriate.

Deni: I loved Australia, but my career is North American based. We couldn't
settle in Colorado when Gordon can't speak or even spell American words. He
bribed me with gorgeous water views (I'm an Aquarian) as well as mountain
views, and we mutually agreed to buy a house in British Columbia.

Q: So what's it like, having two published authors living in the same
house?

Gordon: It's hell...pure, unadulterated hell. There is this phenomenon
called "cabin fever"...very common in remote areas. People live too close...get on each other's nerves...very dangerous. Not a problem for us, of course, because I hardly ever see Deni. In fact, I'm sure I actually "talked" to her more when I was in Australia. Nowadays, she rises early, removes her illustrious presence to her office and I'm lucky if I see her for the rest of the day.

Deni: It's heaven...glorious heaven. Gordon and I don't always have the same
tastes re: food, movies or art, but he understands that an author can become
obsessed with a work in progress. When I write, I don the "skins" of my characters. And since my book, EYE OF NEWT, includes four witches, one wizard-with-a-webpage, and several charms and potions (spells), Gordon knows better than to interrupt me.

Q: You have separate offices, then?

Gordon: Oh yes. We hadn't been in the house a week and I was busy building
her this Taj Mahal of an office...she gets the fax machine and photo-copier,
and the heat [I get to fetch the firewood] and she's closer to the kitchen -
if I want coffee I have to climb stairs.

Deni: We couldn't have shared one office. We'd get nothing accomplished, nothing written. We are still newlyweds, and always will be.

Q: But you both get work done, at least?

Deni: We've gotten a ton of work done. Gordon and I both have new novels out -- my THE WISHING STAR and his SUNSET WOMAN. Gordon also wrote the screenplay for SUNSET WOMAN, an adventure-filled western-romance. However, I'm constantly interrupted by mail calls, coffee breaks, and dog-walking (we have two dogs, Sydney and Pandora). Not to mention grocery shopping. If I left it up to Gordon, he'd come home with pork chops and ice cream, rather than veggies and salad.

Q: Do I detect a note of bitterness?

Gordon: Bitter? Me? Would you call a man bitter just because he whines at having to send his wife emails from upstairs to downstairs if he wants any
sort of conversation during office hours?

Deni: No bitterness on my part (except for the pork chops). And, Gordon keeps our romance alive by sending me provocative emails.

Q: You actually send each other emails...within the same house?

Gordon: Better than shouting. No woman enjoys being shouted at, eh? And
neither of use enjoys being disturbed while working, so it's a...sort of
compromise. Deni's done a power of work since she came to Canada; we both
have. And it couldn't have gotten done if we didn't take a reasonably
professional attitude about our writing.

Deni: Yes. He sends me lovely emails. Gordo is so romantic. I have to say
that you've never been romanced until you've been romanced by a romance
author.

Q: What, exactly, have you accomplished since you got together? Writing-wise, that is?

Gordon: Well, in between fetching firewood, mowing lawns, carpentering,
painting, fencing, building offices, minding the dogs, etc., I got a
screenplay done, wrote a play called STUMPED, finished off a variety of projects including my feral cat novel CAT TRACKS, carved an eight-foot cedar stump on my front boulevard, and, well, heaps of stuff.

Deni: Aside from THE WISHING STAR, a novel about three women affiliated with a popular soap opera, and FIFTY CENTS FOR YOUR SOUL, inspired by events that occurred during the filming of The Exorcist, and EYE OF NEWT, a mystery starring four witches, I'm working on the third diet club mystery, TIE A LAMB CHOP TO THE BED. Diet guru Richard Simmons is a Dietz fan, and there's a picture of him on my website: www.denisedietz.com