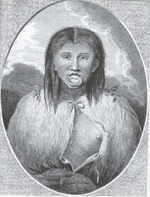 
"She was what would be reckoned handsome even in England.";
-GEORGE DIXON

Captain George Dixon named the Queen Charlotte Islands and was one the first Europeans, after Juan PÃ©rez, to trade with the Haida.

He began his career as an armourer under James Cook aboard the Discovery in 1778. He and his partners subsequently formed the King George's Sound Company in 1785 to capitalize on the sea otter trade.

As captain of the ship named Queen Charlotte, with Nathaniel Portlock as captain of the King George, Dixon had limited success in Alaskan waters in 1786. Both men sailed with necessary licenses from the East India Company. It was during Dixon's second summer spent south of Alaska that he encountered and named the Queen Charlotte Islands after his ship, named for the wife of King George III.

Dixon later left Nootka Sound and traded his furs in China, completing a round-the-world voyage to England in 1788. In his journalistic account of his travels, Dixon included his observations of the Indians he met.

At the village of Yakutat in 1787, he wrote the following extraordinary sentence.

"They, in general, are about middle size, their limbs straight and well-shaped, but like the rest of the inhabitants we have seen on the coast, are particularly fond of painting their faces with a variety of colors so that it is no easy matter to discover their real complexion; however, we prevailed on one woman, by persuasion, and a trifling present, to wash her face and hands, and the alteration it made in her appearance absolutely surprised us; her countenance had all the cheerful glow of an English milk-maid; and the healthy red which flushed her cheek, was even beautifully contrasted with the whiteness of her neck; her eyes were black and sparkling; her eye-brows the same colour, and most beautifully arched; her forehead so remarkably clear, that the translucent veins were seen meandering even in their minutest branches-in short, she was what would be reckoned handsome even in England.";

In the same year Dixon described the Haida of the Queen Charlotte Islands. "The people in general are about the middle size, their limbs straight, and tolerable well-shaped; many of the older people are rather lean, but I never saw one person who could be called corpulent amongst them; both sexes are remarkably distinguished by high prominent cheek bones and small eyes....

"In regard to their complexion, it is no easy matter to determine what cast that is; but if I may judge from the few people I saw tolerably clean, these Indians are very little darker than the Europeans in general.";

Dixon and Portlock published A Voyage Round the World: But More Particularly to the North West Coast of America, in London, in 1789. Much of the text consisted of 49 letters written by a crew member, William Beresford, edited by Dixon, who wrote the introduction and appendices. The book was reprinted by Da Capo Press of New York in 1968.

Dixon Entrance north of the Queen Charlotte Islands is named in his honour. Dixon is also connected to the discovery and naming of Port Mulgrave and Norfolk Bay. It is sometimes suggested that Dixon is the same George Dixon who wrote The Navigator's Assistant (1791), but there is no proof. The journal published by Dixon describes the fate of John MacKay, the first European to live year-round in British Columbia.

A Voyage Round the World: But More Particularly to the North West Coast of America (London, 1789)