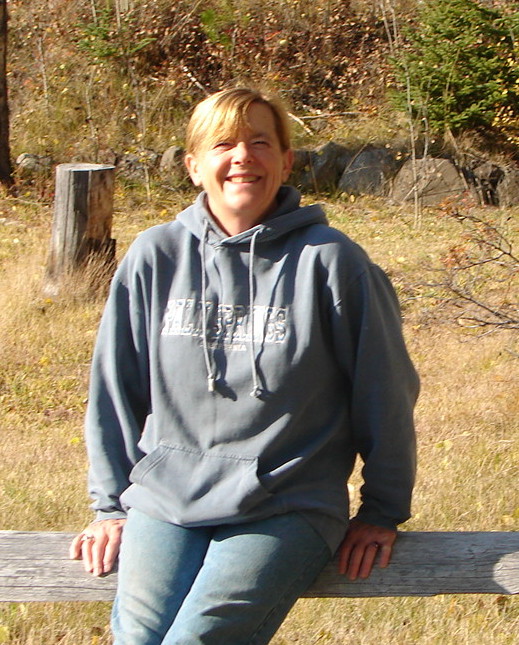 The little community of Lone Butte is named for a six million-year-old volcanic plug that rises some 200 feet above the Cariboo Plateau, It was once the hub of the Cariboo where area ranchers brought their cattle to load on PGE rail cars. As of 2013, it became home to novelist Ruth E. Donald.

"I first heard about Lone Butte almost twenty years ago," Donald said, in 2015, "and I thought at the time that it was a romantic name, right out of the wild west. Since I'd always wanted to live on a ranch where I'd have lots of room for horses, I moved here from the Lower Mainland in 2013. In spite of the space between me and my neighbours, I've come to know more of them in the short time I've lived here than I did during several decades of city life. The pace is slower here - some call it being on Cariboo time - and every time I look up from my computer screen and see open fields, aspen groves and that big Cariboo sky, I know I'm in the right place."

R.E. Donald and her partner, Gilbert Roy, enjoy their Canadian Horses (Le Cheval Canadien), Canada's own heritage breed, and other animals. "It's still ranching country," she says, "and on many of its roads you'll encounter cattle guards and maybe even cattle, or often deer and moose. It's a peaceful and scenic location for a writer, with easy access to a library, bookstore and other amenities in 100 Mile House."

Ruth Donald's whodunnits for her series called the Highway Mysteries feature a trucker detective named Hunter Rayne who is loosely based on her late husband, Jim Donald, a well-known figure in the B.C. trucking industry prior to his death in 1996.

As a former RCMP homicide investigator, Hunter Rayne travels far afield, driving a rig for a B.C.-based company, often aided by a sidekick she describes as "a garrulous biker with problems in impulse control." Rayne's boss and dispatcher, Elspeth Watson, is a no-nonsense gal who has earned her nickname Big Mother Trucker.

Each novel is named for the locale of the highway on which the hero travels. For instance, much of her second novel, Ice on the Grapevine, is set in and around Los Angeles; her fourth release, Sundown on Top of the World, is set in the Yukon and Alaska.

Donald worked in the transportation industry in various capacities from 1972 until 2001, for both air freight and trucking companies. She handled Accounts Payable at Pharmasave Pacific regional office from 2001-2008, and was the Recreation Coordinator for the Horse Council of BC from 2009-2012.

"I was introduced to mystery fiction through my Uncle John's bookshelves at the family cabin on Shuswap Lake," she has written, "everything from Agatha Christie to Dick Francis to John D. MacDonald. I started writing a novel when I was twelve, then wrote numerous business and horse-related articles over the years, but didn't get serious about writing fiction until 1994. At that time, I was very active on the Compuserve Mystery Forum, attended Surrey Writers' Conferences and Bouchercons, joined Crime Writers of Canada (we used to meet at Bunny Wright's house) and Sisters in Crime.

Her late husband, Jim Donald, worked closely with the RCMP in his early years. Her first two novels went unpublished until the summer of 2011 when she created Proud Horse Publishing and released digital editions of Slow Curve on the Coquihalla and Ice on the Grapevine. She is a member of Crime Writers of Canada her Proud Horse imprint is a member of the Independent Book Publishers Association.

"North America is full of highways," she says "and I've got plenty of ideas for future novels in the series."

The third novel in her series, Sea to Sky, was made available in a German translation, in both trade paperback and ebook editions, in 2015, translated by Ingrid Konemann-Yarnell, an ex-pat German living in the U.S. Next will be Sundown on Top of the World. "We chose Sea to Sky and Sundown on Top of the World," Donald said, "as the first books to be translated due to the fact that many Germans love to visit the regions where the two novels are set."

In 2016, Sundown on Top of the World was shortlisted for the inaugural Whistler Independent Book Awards (crime fiction category), which recognize self-published titles in Canada.

A fifth Highway Mystery, Yellowhead Blues, opens with former RCMP investigator Hunter Rayne on the road in his eighteen-wheeler when he's flagged down to help calm a horse with a bloodied saddle and no rider. The RCMP arrest a man for the murder of the horse's owner but Hunter believes they've got the wrong man and sets out to uncover who stood to gain from the death of the wealthy ranch owner. Rayne's beliefs are shared by a rookie female RCMP constable who joins him in the search for the truth. She befriends the dead man's young fiance in an effort to get answers, and discovers that the vulnerable Texas beauty is not who the victim believed her to be.

When you read a whodunnit all the way to the end, it’s gotta’ be good. If you want someone to enjoy it as much as you did, you hand it to ’em and say as little as possible.

Take R.E. Donald’s Yellowhead Blues for example. As the fifth installment of the Hunter Rayne Highway Mystery series—all set in B.C.—it’s a down-home whodunnit that features places such as Valemount, Horsefly, Little Fort and Yreka.

(For geographically-challenged readers, the Yellowhead Highway is a major thoroughfare that connects the B.C. coast with Alberta and was named after Tete Jaune, a blonde Metis guide who led HBC traders through a pass from Jasper in 1825.)

The suicide of Hunter’s PTSD-ridden RCMP colleague and best friend (officially, he was supposedly cleaning his gun) has turned tough guy sleuth Rayne into a loner since he left the force in 1992. Sitting in his rig traversing thousands of miles of highway every week is his ongoing therapy.

Our reluctant hero is diligently guiding his load along the Yellowhead, just west of the Rockies, in 1997, when a good-natured, French Canadian cowboy named Leon flags him down. There’s a skittish horse on the road with a bloodied saddle, so, ever the Good Samaritan, Hunter parks his eighteen-wheeler, and helps.

Leon knows a lot about horses. He’s got two of ’em in his horse trailer. With Leon’s faithful hound Blue, the two men mount up and search for the severely injured rider who must have fallen from his mount.

Deep in the bushes, with the help of Leon’s dog, they discover that the missing rider has been shot in the back. By the time they get the shooting victim to the highway and into cell phone range, he has died. Turns out he’s a not particularly likeable, Alberta-based businessman who dabbles as a ranch owner on weekends.

The first cop on the scene is a rookie from the local Valemount detachment, Bianca Morrison, who reminds Hunter of one of his daughters who is studying criminology at SFU. The male paramedics on the scene don’t take her seriously. Hunter knows all the ropes; he protects her as best he can. And here we get our first clue as to what this mystery is really all about—relationships.

As the former cop and the rookie cop proceed to work together, both equally sure that the Quebecois cowboy Leon has been wrongly charged with the murder, R.E. Donald’s handling of each interrogation, each social interaction, is unerringly skillful and wise. She not only nails the male chauvinism within the force, she provides subtle evocations of Hunter’s feelings towards his daughters.

This whodunnit is as much a whydunnit. Turns out the Alberta businessman was engaged to a far younger woman who was out riding with him. She was claiming virgin status, seemingly lost in her own fantasy. Her nasty brother who works on the ranch would only benefit if the marriage occurred. So, could the rancher’s offspring from a previous marriage be suspects?
R.E. Donald lives on a south Cariboo ranch. She took writing courses at UBC. Her five murder mysteries are self-published. Her late husband was a trucker. She herself worked in that industry for decades, so her trucking know-how is credible. But that’s not the primary appeal of the writing. The sensitive characterizations throughout keep the reader hooked.
Hunter zigzags to southern California

and north to Prince George to undertake his inquiries; Constable Morrison keeps her amorous boss at bay while gaining the trust of the former bride-to-be in order to unravel her pathetic past; the weakest aspect of this tale is how Leon is charged with the crime.
You know a novel is working when you are disappointed when it ends—not because you find the resolution unsatisfying but because you would prefer to remain in the company of the two central characters.

The fact that this novel is self-published should be irrelevant. For decades the most successful work of Canadian fiction worldwide was Stephen Vizcenzey’s In Praise of Older Women, originally self-published.

All such titles from non-government-sanctioned outlets are generally dismissed as anathema by the powers-that-be, nearly all of which are severely prejudiced against self-publishers.
In an ideal world, Canada Council and other agencies would provide some means for established publishing houses to pick up and promote obviously marketable gems such R.E. Donald’s series. 978-0-99407625-9-0