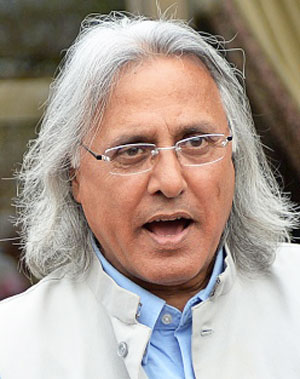 
There are two versions of Ujjal Dosanjh's life story.

In Spring of 2017, B.C. BookWorld ran coverage of smartly-packaged reprise called Journey After Midnight: India, Canada and the Road Beyond. Crediting Dosanjh as the sole author, it was from the 'hybrid' publishing enterprise Figure 1, an offshoot of Scott McIntyre's D&M domain.

But two years ago, and ten years in the making, Douglas P. Wellbanks' biography, Unbreakable: The Ujjal Dosanjh, covered the same territory, edited by Naomi Pauls and distributed by Sandhill Book Marketing. The unattributed biography obviously assisted Dosanjh in the re-release of his own story.

Ujjal Dosanjh was the second provincial premier of non-European descent ever to hold office in Canada. The first was Prince Edward Island's Joe Ghiz, whose father was a Lebanese immigrant. Dosanjh, in contrast, is an immigrant himself.

Here follows a review of Dosanjh's autobiography by historian Hugh Johnston from The Ormsby Review:

In Journey After Midnight: India, Canada and the Road Beyond (Figure I $34.95), Ujjal Dosanjh recounts his journey from a village in the Punjab to London in 1964 and to Vancouver in 1968, to become the 33rd premier of B.C. as well as federal cabinet minister.

As premier of B.C., Ujjal Dosanjh visited his homeland at the invitation of the Indian and Punjab governments during the Christmas break of 2000-01. In his home state of Punjab he naturally visited his birthplace village of Dosanjh, named for his ancestral family.

The Government of Punjab paved a broken, pothole-filled lane of half-a-kilometer into the village of Dosanjh just so he could drive there, rather than walk in or be flown by helicopter.

Dosanjh left India at the age of eighteen, encouraged by the example of another student from his local secondary school. His declared purpose was to enroll in an electrical engineering college in London.

Dosanjh concedes that he was basically an economic emigrant, like many others, attracted mainly by the affluence of the West. His father was the founder of the village primary school but he did not have the means to pay for a university education overseas for an adult son.

Dosanjh had a one-way airfare to London, paid for by his father who had obtained the money from a maternal aunt. When he stepped off his plane at Heathrow airport in 1964, he had little money of his own. Relatives and former fellow villagers living in London gave him initial shelter and helped him find work.

Dosanjh describes a succession of low-level jobs: in a railway yard, in a crayon factory, and as a lab assistant running a projector. None of these jobs enabled him to pay tuition fees, let alone take any time off work for a college education. After three-and-a-half years he re-migrated to B.C.
An aunt and uncle in Vancouver sponsored him as a landed immigrant. They found him work in a sawmill. Within eight years of his arrival in 1968, he had completed a BA, graduated from law school, and been called to the bar, all while marrying and starting a family.
Dosanjh puts his command of English when he first landed in London at a rudimentary grade four level. But he quickly became a news junkie and an enthusiastic user of local public lending libraries.

His political outlook was shaped by the examples of Robert Kennedy, Martin Luther King, and Pierre Trudeau. But he had also grown up with family members in Punjab who had a powerful commitment to progressive and revolutionary ideals: his maternal grandfather had been prominent in the anti-British movement before Indian independence and had served time in jail as a political prisoner.

Dosanjh's memoir reminds us of the appalling troubles of Punjab and the Punjabi diaspora in the 1980s and 1990s, when nearly the whole Punjabi community in Canada was intimidated by the presence of terrorists in their midst.

Dosanjh and his wife Rami had been booked to fly to Delhi on Air India's tragic flight 182 in June 1985. This was the flight carrying 329 passengers and crew that was blown up over the Atlantic by a bomb that terrorists had placed on board in Vancouver. They fortuitously cancelled their booking a few days before.

A few months earlier, Dosanjh had been assaulted by a turbaned Sikh wielding an iron bar who inflicted deep wounds to his head requiring 84 stitches to repair. This attack happened at the end of a working day in a darkening parking lot and ended only when Dosanjh's law partner arrived on the scene, scaring the attacker off and saving Dosanjh's life.
For some time before that, Dosanjh had been receiving threats to his life and to the lives of his family. These threats continued. Dosanjh says that his near death experience in that parking lot attack gave him a renewed sense of life's purpose.

Dosanjh was a lumber union organizer, an advocate for Punjabi farm workers and an NDP party worker almost from the start. But at the summit of his career he was still dismissed by some opponents as an "ethnic"; candidate, although his success at election time and his handling of issues in government belied the charge.

He makes it clear that the Sikh and South Asian community was the base that launched him into politics, but when in 1991 he was first elected as an MLA - after two unsuccessful tries - it was in a riding that was fifty percent Chinese and that was only five percent Sikh and South Asian.

Dosanjh deserves great credit for the principled role he played in the provincial and federal governments between 1991 and 2011 as an NDP member of the legislature, caucus leader, cabinet member, premier of B.C., Liberal member of parliament, and federal minister of health. He made difficult decisions in major portfolios and gained general respect in the process.

As a young man, Ujjal Dosanjh had unrealized ambitions as a writer in Punjabi, and it is not surprising that he writes with sensitivity and telling effect. He records the best and worst of his political career frankly and convincingly.
Dosanjh tells his story with disarming honesty and modesty, superbly in English, a language that he ultimately mastered as an adult.

Hugh Johnston's books include The Voyage of the Komagata Maru: The Sikh Challenge to Canada's Colour Bar; The Four Quarters of the Night: the Life Story of an Emigrant Sikh (with Tara Singh Bains); and Jewels of the Qila: The Remarkable Story of an Indo-Canadian Family.