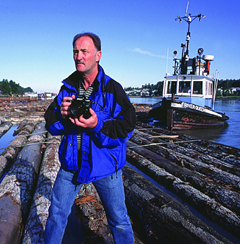 
Born in Edmonton in 1950, Robb Douglas began his career as a still photographer with CFRN television, later switching to 16mm film and eventually video. He moved to Regina to work for CBC National TV News, then to Vancouver. After racing endurance horses in B.C. for a couple of years, Douglas shifted his focus to boats. He lives in North Vancouver with his wife Linda and their daughter Kate. He is the author of Skookum Tugs: British Columbia's Working Tugboats (2002). This coffee table book, with text by Peter Robson and Betty Keller, received the 2003 Bill Duthie B.C. Booksellers Choice Award. "I'm totally shocked," said Douglas. For Skookum Tugs, according to his promotion, "Douglas donned a pair of caulk boots and learned to run up and down logs with his cameras as nimbly as a boom man."