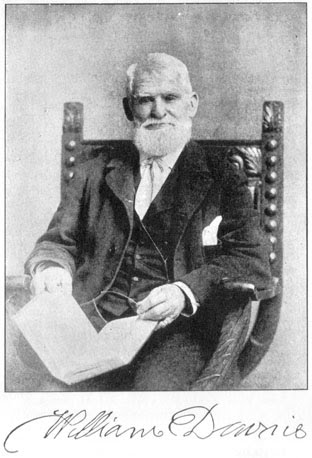 
"Major"; William Downie was born a Glaswegian Scot in 1820. Downie's thirst for adventure carried him to sea, eventually landing him in Ontario, Canada during the early 1800s. On arrival in Canada, Downie left his ship and journeyed south to Buffalo where he heard news of a massive gold discovery in California. Determined to find his fortune, Downie boarded a clipper ship bound for San Francisco via Cape Horn, and disembarked in time to join the first of the two gold rushes he was destined to be part of during his lifetime.

In 1849, Downie made gold rush history, when he formed a prospecting company composed of himself, seven African-American men and one Caucasian boy. The company explored the upper reaches of the Yuba River in California. Unlike many working groups of the time, Downie's concern was an equal partnership based on the principles of share and share-alike. Every night, the day's earnings were scrupulously divided into equal shares.
Downie was the founder and first mayor of the town of Downieville, California. Local legend suggests that he offered the people of the town a full can of gold to name the town in honour of him.

In 1861, at the request of Governor James Douglas, Downie traveled from Victoria northward, to explore the Bute Inlet of coastal British Columbia. Hopes were high that Downie would discover a site for a road to carry miners inland to the Cariboo gold rush. Upon his return to Victoria, Downie spoke at a noisy town hall meeting. He insisted that no road would ever be built through Bute Inlet, that the mountainous terrain was "the most miserable terrain I have seen in British Columbia."; The audience of men filling the smoky hall grew angry, shouting and jeering at Downie, as they pelted him with a barrage of objects and tried to force him out. Downie held his ground, telling the crowd that the amount of gold to be found on the coast would pay a miner a dollar a day, not the 20-100 dollars that miners were digging up in the Cariboo. Downie's discoveries were quickly dismissed as superficial, but later attempts to build a wagon road through Bute Inlet to the Chilcotin sparked what was later known as, the Chilcotin War, or the Bute Inlet Massacre, a confrontation between local Tsilhqot'in (Chilcotin) people and workmen sent to construct a track through the Tsilhqot'in's traditional territory.

Eventually, Downie married a Scottish woman from Victoria. He died aboard the steamer ship "City of Peubla"; while returning from Victoria to San Francisco in December 1893.