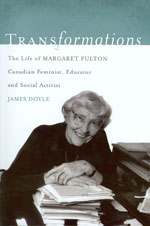 
A former professor of English at Wilfrid Laurier University, James Doyle was a friend and colleague of feminist and educator Margaret Fulton. His biography of Fulton, Transformations: The Life of Margaret Fulton, Canadian Feminist, Educator and Social Activist (ECW, 2006), provides an account of her life, from her modest beginnings on a farm in rural Winnipeg, to a respected career in education as Dean of Women at UBC and President of Mount. St. Vincent University in Nova Scotia.