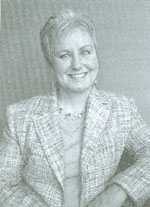 
Originally from Toronto and Saskatchewan, Penny Draper lived in Switzerland, New Zealand and Prince George prior to moving to Victoria in 1989. Her sixth book, Day of the Cyclone, won the University of Regina Faculty of Education and Campion College Award for Publishing in Education at the Saskatchewan Book Awards in 2013.

Her first juvenile novel, Terror at Turtle Mountain (Coteau, 2006), is based on the Frank Slide, on April 29, 1903, when approximately 100 million tons of limestone from Turtle Mountain killed 76 people--while twenty-three people were rescued from under the slide and twenty-three others escaped into a tunnel. In the story, the heroine's cousin is coming to visit on a train, the Spokane Flyer, and 13-year-old Nathalie Vaughan is worried that the train will not be forewarned of the debris on the railway track. (Cathy Beveridge also published a juvenile novel about the Frank Slide, three years earlier.)

Her follow-up in her Disaster Strikes! series, Peril at Pier Nine, concerns the tragic fire aboard the cruise ship Noronic on September 14, 1949, on Lake Ontario, when almost 140 people were killed.

It was followed by Graveyard of the Sea, about a West Coast lighthouse keeper's daughter in 1906, incorporating the grounding of the Valencia in January and the maritime tragedy of the Coloma eleven months later.

A Terrible Roar of Water concerns a tsunami that struck the Burin Peninsula of Newfoundland in 1929.

Ice Storm concerns the storm that struck Eastern Canada and the U.S. in January of 1989. The two twelve-year-old female protagonists are an ice skater in Montreal and her farm-girl cousin.

Penny Draper branched out to write a novel for young teens, Breaking Big (Orca 2016), in which an undisciplined prankster named Robin must rise to the ocassion and perform the role of the annoying trickster Puck in a dance production of A Midsummer's Night Dream after the principal dancer is injured.

A bookseller and storyteller, Draper has also been shortlisted for a Surrey Writers Festival competition and a runner-up for a Four Hour Children's Book Writing Competition in Prince George.