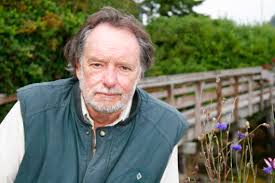 "Almost to the person, tourists, when asked, would identify the boardwalk as their favoured impression of Bamfield," says Louis Druehl. "The iconic structure has served Bamfield since before the road [was opened]." In Louis Druehl's novel about the town of Bamfield called Cedar, Salmon and Weed, the boardwalk is a focal point for much of action. The central character notes that everyone in the community can be viewed there: "henpecked husbands sneaking a drink from a bottle hidden in the brush, loiterers fighting for sunny spots or dry spots, not-so-discreet meetings between lovers. And on the inlet, there were the callouts from the lifesaving station-sometimes with bodybags. And the return of frustrated or happy or drunk fishermen after a day or week of fishing. And tourists in their fancy yachts, martini glasses at hand, pointing at the weird villagers, and seeking anchorage or fuel."

ENTRY: Those who have braved the 60-mile gravel road from Port Alberni to Bamfield can easily agree with Simon Winchester's assessment of Bamfield in the New York Times as a tight-knit town full of hidden intrigues and eccentrics..."the perfect subject for a novel."

Modelled on John Steinbeck's classic Cannery Row, Louis Druehl's debut novel Cedar, Salmon and Weed (Granville Island 2015) describes Bamfield on the west coast of Vancouver Island in the 1970s through the eyes of a well-intentioned local known as Gaz, a builder, marine biologist and marijuana cultivator who dreams of building a cedar palace. He's a hard-working guy who falls hard for Heidi, a visiting student at the local marine research station. Along the way the reader is introduced to an endearing and believable mix of fishermen, hippies, First Nations and the scientists. It's the Great Bamfield Novel by someone who knows the town's manners and history.

It's a world where men routinely piss on the smouldering embers of a fire and people can tell you the difference between a native oyster and the introduced Japanese oyster. Where a mind-blowing psilocybin and mozzarella omelette is common breakfast fare. Where Indians might still prefer to call themselves Indians. Back in the Seventies...

"Bamfield is many worlds," writes Druehl. "Some say a world for each inhabitant, each end-of-the-roader. The world of the lonely fisherman facing monstrous payments on his boat, staring at the trolling wires dragging dozens of hooks, imagining a school of salmon--his ticket out of hell--ready to strike. The ancient schoolmarm shepherding twelve kids, ages six to eighteen, into the amazing world of out there, while her sailor lover lies on the bottom of the Atlantic. The aging lesbians, who bake and take in laundry, who pretend to be what they are not, livinig in fear of being discovered for what they are. The drunks, the wife-beaters, the cheats, the boisterous, the insecure, and the dull, they all have their little worlds, their dirty secrets and great sorrows, and occasional joys."

Louis Druehl's book Pacific Seaweeds (Harbour 2001, 2016) is the authoritative guide to over 200 common species of seaweeds in the Pacific Northwest, ranging from the coastline of southeast Alaska to central California. Co-written with Bridgette Clarkston of Comoix, Pacific Seaweeds: A Guide to Common Seaweeds of the West Coast, Updated and Expanded Edition (Harbour $28.95) received an honourable mention in the Nature Guidebooks category of the 2016 National Outdoor Book Awards.

Also editor of The New Bamfielder, Louis Druehl was a professor of marine botany at Simon Fraser University for thirty years. He has also taught field-oriented seaweed courses at the Friday Harbor Marine Laboratories and was influential in establishing the Bamfield Marine Station, often working in association with the University of Alaska. His research focuses on all aspects of kelp, including its evolution, ecology and physiology.

Druehl and his wife Rae operate Canadian Kelp Resources Ltd., a company that produces sea vegetables (Barkley Sound Kelp) and operates a kelp farm. He has a kelp genus and species named after him.

Yes, gourmands, it's time to embrace a new trend-sea vegetables. Specifically kelp. And who better to give you kelp-help than a man who has had a genus of kelp named after him?

Marine botanist Louis Druehl, who lives south of Long Beach at Bamfield, has revised and expanded his guide, Pacific Seaweeds (Harbour $28.95), co-written with Bridgette E. Clarkston, as the authoritative guide to over 100 common species of seaweeds in the Pacific Northwest. So we asked Louis for his Top Ten Things You Don't Know About Kelp. This way, when you chow down on sea vegetables at a high-end restaurant, you can be more knowledgeable than the waiter.

Louis Druehl and his wife rae operate
Canadian Kelp Resources Ltd., a company that produces a line of sea vegetables (Barkley Sound Kelp). A kelp genus called Druehlii was named after him, but when an older name resurfaced, the accreditation had to be dropped. Subsequently a kelp species restricted to Haida Gwaii was named Saccharina druehlii. The Japanese have long eaten kelp.
Restaurants in B.C. that serve "sea vegetables"; include Tojo's Japanese Restaurant, Wickinninish Inn and The Wolf in the Fog featuring Bamfield Seaweed Salad. The Tofino Brewey makes Kelp Stout.
Pacific Seaweeds: 978-1550172409
Cedar, Salmon: 978-1-926991-61-0

1. The female kelp produces a perfume that attracts the sperm. This substance smells like gin.
2. Kelp is the source of umami, a flavour enhancer. The new scientific discipline of gastrophysics was partly started to understand "savory taste,"; one of the five basic tastes (including sweetness, sourness, bitterness, and saltiness).
3. The brown pigment of kelp, fucoxanthin, is a strong antioxidant.
4. The slime of kelp, fucoidan, is thought to hold off the diseases associated with aging (hypertension, diabetes, stroke, etc.).
5. Iodine, as an element, was first discovered in kelp. The concentration of iodine in kelp is up to 20,000 greater than in seawater.
6. The San Francisco Philharmonic featured kelp horns on one occasion.
7. In case of nuclear war or meltdown of a nuclear plant, eat some kelp and load up your thyroid gland with the good cold stuff and not the radioactive iodine that can be lethal.
8. Kelp are not plants or animals but plantamials. They are sessile and photosynthetic but when it comes to microscopic structure, egg and sperm sex and not pollen and stigma sex, they are animals.
9. Kelp is considered an excellent source of biofuel. It can be easily grown, does not compete with corn and the like for valuable agricultural land. I call the potential alcohol derived from kelp, kelpanol.
10. Kelp brownies are substituted for dope confections by matured hippies.
BCBW (Autumn 2016)