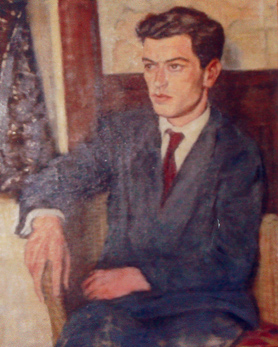 
Born in Vancouver on February 10, 1930, William Wayne Dumaresq was the son of a Vancouver policeman William S. Dumaresq and Mary Dumaresq of Pender Harbour. He was the brother of Darrell Dumaresq of Toronto and to two older sisters, Dorothy Cooper of Richmond, B.C. and Audrey Urkevich of Sebastopol. He attended Lord Byng High School where he was known as "the poet" to friends, including Howard B. Gerwing (whose memories of Dumaresq provided much of the following information):

As a young man Dumaresq was a lover of movies and worked at the Varsity Cinema, located in Point Grey. His poetry won him prizes and scholarships. After high school he enrolled in classes at UBC where he was a member of the Letters Club and took John Milton as his "leading light and mentor." His friend Gerwing remembers him as a man surrounded by controversy, as "he was always willing to defend unpopular causes." After attending UBC, Dumaresq accepted a teaching assistant position in the department of English at the University of Saskatchewan. He eventually became a head teacher and produced a short radio weekly piece on poetry for the local radio station.

In 1962 Dumaresq moved to England to attend University College, University of London, where he was to expand his Milton thesis into a topic for a Ph.D thesis. He was sidetracked, however, when he met Galt MacDermot, another Canadian ex-pat with whom he began writing and producing songs. Together they wrote the screenplay and music for "Duffer" (1971), a film based on Dumaresq's yet-to-be-published novel of the same title. Their final collaboration was an adaptation of "The Human Comedy," based on a story by William Saroyan, for which Dumaresq contributed the libretto. It premiered as a Joseph Papp production for the New York Shakespeare Festival and premiered on Broadway at the Royale Theatre on April 5, 1984.

Earlier Dumaresq had collaborated with creator of the musical Hair, Galt MacDermot, for a British musical, Isabel's a Jezebel. Loosely based on a Grimm's Fairy Tale, it premiered at the Duchess Theatre London's West End on December 15, 1970 with music by MacDermot, and book and lyrics by Dumaresq. It ran for 61 performances featuring Frank Aiello, Sharon Campbell, Helen Chappelle, Peter Farrell, Carole Hayman, Michele Mowbray, Maria Popkiewitz, Miguel Sergides and Howard Wakeling. Co-directed by Michael Wearing and Julie Arenal, story focussed on the tempestuous sexual relationship between Isabel and a deep-sea lover. MacDermot's record label released a recording based on the musical, Isabel's a Jezebel (Kilmarnoch, Stereo kil 72006), in 1972.

After suffering a non-fatal stroke at the door of his workplace in 1992, Dumaresq was diagnosed with cancer. He died in England on October 8, 1998.