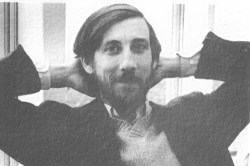 
Born in Ithaca, New York in 1953, Dyson is the son of English physicist Freeman J. Dyson and Swiss mathematician Verena Huber-Dyson. He grew up at the Institute of Advanced Study, where such scientists as his father, Freeman Dyson, and John von Neumann laid the foundations for the Information Age. He left home at 16 to explore the Northwest Coast, building canoes in British Columbia and living in a treehouse at a height of 95 feet. In 1978 his fascination with the Aleut kayak, or baidarka, was constrasted with his father's designs for spacecraft in a 'dual biography' by Kenneth Brower called The Starship and the Canoe. In 1986 he published his first book, Baidarka, a history of the developement of the Aleut kayak, with illustrations spanning 245 years. At the time of publication he was building kayak-type boats in Belcarra, B.C. and was founder of the Baidarka Historical society. He later moved to Bellingham, Washington and authored Darwin Among the Machines: The Evolution of Global Intelligence (Addison Wesley, Helix Books, 1997). It has a broad intellectual scope, from philosophers to the increase of intelligence in computers.