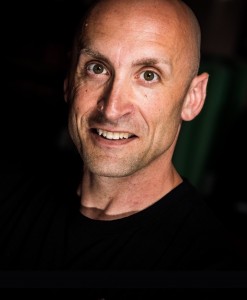 
James Eke is a former journalist who spent eleven years in the military. At 46, as owner and chief instructor of the Eke Academy of Martial Arts in Victoria, Eke released his first martial arts book, Warrior's Way: A Guide to Lifelong Learning in the Martial Arts, encompassing his knowledge from 35 years as a martial artist.

Warrior's Way: A Guide to Lifelong Learning in the Martial Arts is not designed to serve as a 'how-to' book. "I hope that what readers get out of the book is a deeper understanding of the martial arts," he writes. "I started training when I was about twelves and, like I say in the book, it takes a long time to really understand what the martial arts is about at its core. I like to think of myself as a perpetual beginner and for me, training and teaching the martial arts is about every day starting fresh, every day trying to become more than I was yesterday and every day trying to figure out who I am and what I can do to not only make myself better but the world around me better.";

Of all his instructors, Eke has felt particularly indebted to Dan Inosanto, from whom he has learned everything from Bruce Lee's Jeet Kune Do, Filipino stick-fighting art of Kali, Malaysian Silat to grappling and kickboxing. "Dan Inosanto is not only my teacher and mentor," he says, "but when I think about it, he has completely changed my life. When I sat down to write this book I wanted to make sure that I was not only writing something that would be useful to my own students and other martial artists but as a way of saying to Mr Inosanto how thankful I am that he has been in my life.";

Eke's martial arts school conducts an annual food drive during the Christmas season to aid the Mustard Seed Food Bank. He also developed the EAMA Angel Bag program at the school which filled 50 backpacks with the necessities of life, in conjunction with a local homeless shelter.

"In the martial arts we learn that it is really easy to hurt people but what is harder and more important is how to build people up," he writes. "I hope that the Eke Academy will always do that and I hope that with my book, Warrior's Way, people will also foster that idea in people.

"At the end of the day the book and my teaching isn't about punching and kicking and grappling, it is about reaching your full potential in life."

In James Eke's first novel, Falling Backwards (Ekstasis 2002, the narrator leaves his relationship, job and lifestyle behind and finds himself on the streets of Vancouver's East Side. It's a first novel with an eclectic mix of skid-row angels, philosophical junkies and wandering Buddhist monks.

James Eke also has a forthcoming novel, Roadside Saints. "I have a lot to write still," he says. "After Falling Backwards came out I entered military service and spent over a decade travelling and doing army-type things but I have always been a writer and this book is just the natural progression for me.";