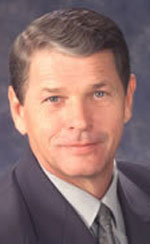 
Born on June 19, 1951 in Sasketchewan, Paul Elder came to B.C. in October, 2004. He is a survivor of two near-death experiences: a drowning at the age of 12, and a heart attack at the age of 41. After spending nearly a decade as a radio and television news reporter, Elder ventured into a career of politics and business spanning more than 20 years. A trainer at the Monroe Institute in Virginia, Paul lives on Vancouver Island, and spends his time writing, teaching, and speaking throughout the United States and Canada on the phenomenon of near-death and out-of-body experiences. In his Eyes of an Angel (Hampton Roads, 2005) Paul Elder
recounts the events he perceived following a near-death experience, in which a psychic doorway opened to him. "We already know the answers to life's mysteries," he claims, "we've only forgotten." He suggests the answers to life can be found in "the power of love."