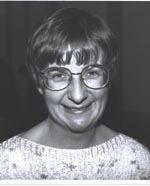 
Born in Vancouver in 1952, former librarian Sarah Ellis is one of the foremost writers for children in Canada. During her ten years as a librarian she developed her storytelling and puppetry; and she spent a year at the Center for the Study of Children's Literature at Simmons College in Boston. She now writes reviews and gives lectures internationally on Canadian children's books.

Among her many awards, she received the first Sheila A. Egoff B.C. Book Prize in 1987 for her first book, The Baby Project, a story about a family coping with the death of an infant. She won the 1991 Governor General's Award for Children's Literature for Pick-up Sticks, a juvenile novel about homelessness and single parenting. It was also nominated for the 1992 Egoff Prize. Out of the Blue (1994) won the Governor General's Award, the IODE Violet Downey Book Award and the Mr. Christie's Book Award. In 2013 she received the Lieutenant Governor's Award for Literary Excellence. [See press release below]

Her other books include Putting up with Mitchell, a light-hearted look at visiting Vancouver from a child's perspective, and picture books Big Ben (2001) and Ben Over Night (2005), illustrated by Kim LaFave. Days of Toil and Tears (Scholastic, 2008) is the fictional diary of a young girl in Almonte, Ontario, set in 1887. After moving out of an orphanage and in with her aunt, Flora begins to work at the mill, enduring long hours and dangerous machinery. The book provides young readers with history on the Canadian textile industry and child labour at the turn of the 19th century.

In 1995 she won the Vicky Metcalf Award for a Body of Work, and in 1999 she was the first Writer-in-Residence children's author at Massey College at the University of Toronto. She was also a finalist for the Norma Fleck Award for her non-fiction The Young Writer's Companion. In 2007 Sarah Ellis won the $20,000 TD Canadian Children's Literature Award established in 2005 to honour the most distinguished book of the year for children aged 1 to 13. Entries were judged on the quality of the text and illustrations and the book's overall contribution to literature. The publisher of Ellis' Odd Man Out (Groundwood) also received $2,500 for promotional purposes.

Articles: 5 Articles for this author
Back of Beyond (Groundwood $9.95)
Info


Amy plots nasty revenge on her twin. Rita gets her license and drives alone for the first time. The new kid at Curtis' school has webbed fingers. The unsettling and the unexplained haunt the teenagers in Back of Beyond (Groundwood $9.95), short stories by Vancouver's Sarah Ellis.


Upon discovering his apprenticeship with Ledger & Ledger has nothing to do with the wonders of the printed word-and everything to do instead with columns and rows and misbehaving sums-12-year-old Otherjack wraps his dictionary in his second-best shirt and flee's the Opportunities School for Orphans and Foundlings in Sarah Ellis' The Several Lives of Orphan Jack (Groundwood $14.95). "Boldness and bundles,"; he says. "That's the life of an ex-bookkeeper."; The enterprising lad makes his escape at sunrise, hidden in a fold of sheep, whereupon all his 'otherness,' such as the school's bells, rules and masters, drop away until he's just himself. Jack. "Views, vicissitudes and vastness,"; he says. "That's the life of a bird of passage."; But where to sleep? What to eat? How can a penniless former scullery boy make his way? By selling whims and notions, of course, impressions and fancies, all the ideas that had come to Jack in the hours of scrubbing pots and sleepless nights lying in a cold, mean bed. The line of customers never grows shorter and the supply of merchandise never dwindles. Not everyone, though, is ready for "fresh air for the brain,"; especially the unimaginative, draconian mayor. "Toffee and tyrants,"; says Jack. "That's the life of an ideas peddler."; Bolstered by his old dictionary, he hoists his pack and stalwartly heads down the road to adventure. With illustrations by Quebec artist Bruno St-Aubin, The Several Lives of Orphan Jack is the latest gem for master storyteller Sarah Ellis. A Governor General's Award winner for Pick-Up Sticks and Out of the Blue (awarded a Mr. Christie and IODE Violet Downey as well), Ellis is a sought-after conference speaker and the first children's author to be named Writer in Residence at Massey College at the University of Toronto. 0-88899-529-6

Putting Up With Mitchell and Next Door Neighbours
Review


IN 1987 SARAH ELLIS BECAME THE FIRST recipient of the Sheila A. Egoff Prize for her first book, The Baby Project (Groundwood $6.95).

This fall she is the author of two new books, Putting Up With Mitchell (Brighouse $9.95) and Next Door Neighbours (Groundwood $7.95).

After reading approximately one book per day throughout her childhood, Ellis naturally turned to storytelling when, as a critic for Horn Book magazine and as a North Vancouver children's librarian, she found herself surrounded by a community of writers in Vancouver.

"1 wanted to see if I could do it. That must occur to anyone who gets pleasure out of children's books."

The Baby Project is a modern family story with a cast of believable characters adjusting to a new baby in the home. Mom jogs and works on her computer; Dad drives taxi or stays at home with the kids.

After ll-year-old Jessica is taken aback by the news that her mother is pregnant, she and a school friend enthusiastically adjust by monitoring her mother's 'baby project' as a school science project.

With a sudden twist of direction and tone, the baby dies and the narrative shifts from comic warmth, quirky wit, and sharp characterization to tragedy. The reactions of Jessica and her family are dealt with sensitively and honestly.

"I intended on writing a wholly sunny book like Lois Lowry," says Ellis, "a funny, warm family story. It kept getting serious on me. I knew the children were unhappy but I didn't know about what. I picked the baby's death because it didn't involve blame; it was a bolt from the blue."

In a previous interview Ellis has elaborated on the unpremeditated origins of the tragedy.
"The part about the baby dying is just made up. It hasn't happened to me and I don't know anyone it's happened to. I did read a long and scholarly book on sudden infant death syndrome, just to make sure I didn't get anything wrong, but that was the extent of the research."

As in The Baby Project, a Vancouver setting is subtly evoked in Ellis' new novel, Next Door Neighbours, set in the 1950's. Vignettes and Ellis' low-key, offbeat sense of humour propel the quietly-paced story of 12-year-old Peggy who has just moved from the country to the city.

Ostracized by her new schoolmates, Peggy forms, over a long shared summer, an unlikely friendship with her neighbours, a Chinese cook and a Russian immigrant. The multicultural aspect of the story is true to the Vancouver of the 50's as well as the Vancouver of today.

Ellis does not subscribe to the school of thought that children need lots of plot.
"I am trying to work out for myself," she says, "how to write a, compelling book without relying on major events. I like to notice how things are and try to capture that: the details that build a world, the relationships between characters, the surface of life how you
eat an ice cream cone."

Her latest book, Putting Up With Mitchell: My Vancouver Scrapbook, is full of charming details in concert with the exuberant and whimsical illustrations of well-known graphic artist Barbara Wood.

While visiting their grandmother in Vancouver, Elizabeth and her loudmouth younger brother Mitchell are taken on day-trips to Vancouver landmarks such as the UBC Anthropology Museum, the Vancouver Art Gallery, the Ho Ho Chop Suey restaurant ("Does Santa Claus live here?" Mitchell asks), the aquarium and the Bloedel Conservatory.

The lively storybook for young readers was partly inspired by Vancouver bookseller Phyllis Simon who noted there wasn't a kids' book specifically about Vancouver. As an admirer of Barbara Wood's pictures of Vancouver buildings, publisher Terri Werschler subsequently approached Sarah Ellis to create an appropriate storyline and characters to match Wood's style.'

Ellis maintains that writing books has had an impact on her column for Horn Book magazine, making her a more appreciative reader, more aware of the structure of books and the effects achieved, and more easily delighted with original, successful workeven
more capable of recognizing the amount of work that went into the making of a lacklustre book.

But, she adds, "I still hate to be disappointed. I want people to do betternot get away with cheap effects and cliched thinking."

Ellis' voice in her Horn Book column is refreshingly intimate and often inspiring. She quotes Michelle Landsberg: "One simple, but I think valid, touchstone for literary criticism is to ask whether it leads you back to the book that is its subject."

Ellis feels her writing in "News from the North" is neither reviewing nor criticism, but appreciation of a variety of genres and writers. In ranging from L.M. Montgomery's journals to Elizabeth Cleaver's picture books, her influential column has discussed other B.C. children's book writers such as Sue Ann Alderson, Betty Waterton, Jan Hudson and Kit Pearson.--by Judith Saltman


Ben Over Night (Fitzhenry & Whiteside, $19.95), Sarah Ellis' sequel to Big Ben, takes young Ben, who's really not that big, to Peter's house where anything can happen. Ben can be a pirate, a potato, a cook. He can be light as air. He can be invisible. The one thing he can't be, however, is a sleepover-nighter. At Peter's house the bed feels wrong, there are strange noises in the night, there's no cat on his stomach. A flashlight doesn't help. Neither does Blankey. Nor big brother Joe's offer to come along. But sister Robin helps Ben dream the magic solution. Ellis and illustrator Kim LaFave have been both recognized with Governor General Awards. 1-55041-807-2


Poet Lorna Crozier and children's author Sarah Ellis have been selected as winners of the 10th annual Lieutenant Governor's Award for Literary Excellence.

Among many other awards and honours, Crozier is a past winner of the Governor General's Literary Award, was named an Officer of the Order of Canada in 2011 and was recognized as a Fellow of the Royal Society of Canada in 2009. Her latest book of poetry, The Book of Marvels: A Compendium of Everyday Things, was named as one of The Globe's Top 100 Books of 2012 and was nominated for this year's Pat Lowther Award for the best book of poetry by a Canadian woman.

Ellis is one of the most illustrious and admired writers for children in Canada. A librarian, book reviewer, and sought-after lecturer on Canadian children's books, her previous awards and recognition include the 1991 Governor General's Award for children's literature, the 2007 TD Canadian Children's Literature Award, and this year was one of two Canadian nominees for the international book prize, The Astrid Lindgren Memorial Award.

Crozier and Ellis will share the $5,000 prize, which will be presented by Lieutenant Governor Juidith Guichon on May 4 in a ceremony in Victoria.

The award, established in 2003, recognizes BC writers who have made major contributions to the development of literary excellence in the Province.