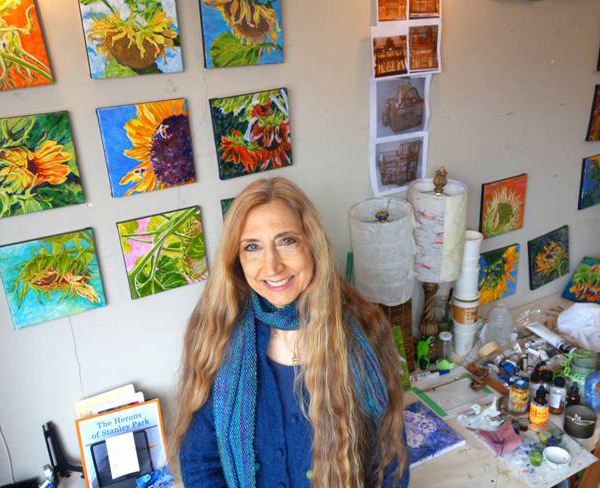 
Following the bombing of the Kunduz hospital in Afghanistan by American forces in October of 2015, the seventeen poems by Mayne Island's Julie Emerson for Twenty-Seven Stings (New Star $18) were published on November 11, 2015. Her suite illuminates various aspects of warfare, including the rules of warfare; the roles of women as pawns or inspirations; battles, and the use of poisons and bees as weapons, as she examines military strategies that have generated wars from the sixth-century BCE China to Alexander the Great to American drone warfare. Twenty-Seven Stings is illustrated by Roxanna Bikadoroff.

Emerson previously collaborated with photographer Martin Passchier in 2014 to produce The Herons of Stanley Park. The book covers the ecology of a colony of Pacific Great Blue Herons that have nested in Stanley Park since 2001.

Forget fortune cookies. In 2018, Julie Emerson installed a Haiki Gumball Machine at Albion Books (523 Richards) to provide bookstore patrons with a free, randomly selected haiku from among works provided by forty B.C. haiku poets, as well as five class Japanese poets. The ceremonial first crank was performed by poet Jacquie Pearce. She also read aloud one of her own haiku from an acorn capsule as a video event.


Emerson is the daughter of Art Finley (1926-2015) who was a talk-radio host in Vancouver for CKNW and CJOR. His career in newspapers, radio and television began in 1943 in Houston and spanned 50 years, mainly in Vancouver and San Francisco.