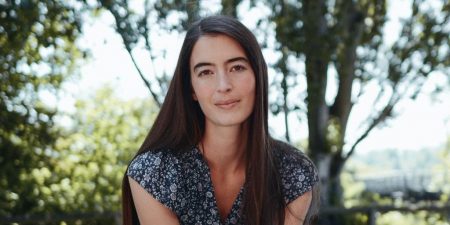 
Thirty-nine weeks and six days pregnant, Emma Hansen felt her baby go quiet inside of her. Doctors confirm her baby is dead due to a true knot in his umbilical cord. Yet, she must deliver him. Only nine days later, deeply grieving, Hansen turns to writing an essay that she posts on her website with photos from the delivery room. It goes viral. Messages flood in from people with similar experiences. Still grieving, Hansen is driven to better understand stillbirth. Out of this mixture of emotional turmoil and effort to learn about what she, along with two and a half million women annually, have undergone, Hansen published Still: A Memoir of Love, Loss, and Motherhood (Greystone $24.95) to find a way to live with the loss.

Emma Hansen is a writer and trained doula. Her father is Rick Hansen, the former Paralympian and disability activist.

There are few taboo topics left in the Western world in 2020, thanks largely to stand-up comedy, documentary films and books written by courageous survivors who tell their painful truths and, as with this book, tell them most eloquently.

Stillbirth was, and still is, in some families and some cultures, one of those taboo topics like shell shock was for returning soldiers in WWI. Shell shock, of course, is now widely known as PTSD, Post Traumatic Shock Disorder, and most veterans are finally receiving skilled and compassionate counselling.

Women who endure miscarriages and stillbirths, however, may be expected to ?soldier on? in the same way those early war veterans were expected to somehow ?get over it? with enough fresh farm air, home-cooking and hard work.

Emma Hansen had it all: youth, beauty, a simpatico marriage, a loving extended family and an international career as a model. She was thrilled about becoming a mom and she happily blogged and posted to Instagram as the weeks and months rolled by. Then, after eating all the right healthy foods and faithfully going to yoga and pre-natal classes, at thirty-nine weeks and six days, a day before her delivery date, she felt her baby go quiet inside her.

This book, as well as being emotionally honest and therefore powerful, is beautifully written and balanced in all the right ways. She explores medical research on the subject of stillbirth and she is grateful to the diverse phalanx of medical expertise in Vancouver throughout her pregnancy and birth. She discovers just how many other women have experienced this cruel loss and how supportive they are to her. She seeks the spiritual meaning of such a loss. Meanwhile, she lives with debilitating grief and endures it.

The big question is: why? Why do these hard, bad, and so very sad things happen to us? To look more deeply into her experience, Hansen returns to blogging and Instagramming. Her social media followers were invited to share her story of losing her stillborn infant, named Reid for her maternal grandfather, Patrick Reid.

Readers had been previously charmed by her descriptions of nursery decorations and all the anticipatory joys of impending first-time parenthood. Now they learned how Reid died of a ?true knot? in his umbilical cord, possibly achieved by somersaults in utero as he was, by her account, a lively little gymnast and kick-boxer. So at least the medical ?why? question of this sometimes baffling death could be answered.

Having gone through the agony of labour, knowing in advance her baby would be stillborn, Hansen was not anticipating that the story of her private duress would be spread by bereaved readers to thousands of people, and thousands yet again.

?As I read each message that reaches me, devour their condolences and stories, I feel, somehow, that I am being validated. I left the hospital thinking that I must be the only person in the world this had happened to, that I?d done something terrible to invite it, that I couldn?t grieve this loss?didn?t know how. ?It is a great privilege to receive their stories, and they are a gift to me. These words tell me I am not alone, they assure me that I did not cause this, and they provide a road map to the kind of grief that once seemed so invisible.?

In countries with higher incomes, like Canada, the U.K. and the U.S., stillbirths account for three to six deaths per one thousand births. I did some research, as well, and those figures are even lower for the Netherlands, where midwifery is the norm, and also in Japan and the Scandinavian countries, especially Iceland.

In contrast, the figures for Afghanistan in 2017 are truly dismal: 110 stillbirths per one thousand births. Statistics are sometimes elusive because stillbirths must be recorded first of all, and many aren?t. Also, statistics can be based on different medical facts, in different countries. Miscarriages and deaths occurring during labour are sometimes included with stillbirth statistics, for example.

Risk factors are much worse for undernourished women in sub-Saharan Africa and south Asia. In Canada, Indigenous women have higher rates than the rest of the population. Sometimes, genetics play a role, as do accidents, war, poverty and relentless stress. Not surprisingly, the numbers from European refugee camps are much higher than the resident population.

Emma Hansen sought advice about coping from her dad, Rick Hansen, who knows more than most of us mortals about pain and loss and transcendence.

?He tells me that all these years later, he knows that he would not be the same person?would not have grown, lived, and loved as much?if he hadn?t gone through that terrible moment on June 27, 1973. He wouldn?t have gone on his Man in Motion World Tour where he wheeled around the world and changed the lives of millions. He wouldn?t have met my mother, or had me and my sisters, and Reid wouldn?t have been born.?

The birth of Hansen?s second baby boy, Everett, was not a breeze. More ordeals had to be endured. Her well-honed and intelligent instincts saved her baby?s new life, without a doubt.
The support from her extended family?especially from her mother, Amanda Reid Hansen, who is, quite simply, a magnificent mom?and the sound advice she accepted throughout her experiences, as related in Still, provide us with an important road map for women and their partners, their families and friends, for dealing with comparable challenges.

A helpful bibliography of resources for readers is also provided. It includes extensive scientific studies, other memoirs, fiction, poetry, and grief education. 978-1-77164-391-7

Caroline Woodward discovered during her reading of this book that she is a rainbow baby - one born subsequent to a miscarriage, stillbirth, or other death from natural causes.