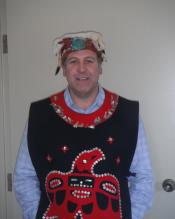 
This book is designed to teach K'ómoks children their ancestral Kwak'wala language. The story is inspired by a lullaby sung by Chief Charles Mountain Wilson, great-grandfather of Rob and Andy Everson.

Rob Everson (pictured) is the Chief Councillor of the K'ómoks First Nation. He is also Hereditary Chief of the Gigalgam Walas Kwagut.
Rob has a Diploma in Computer Science and a Certificate in Information Technology. He lives on the K'ómoks reserve with his wife and three children.
Andy has a Master's degree in Anthropology. He is the owner of Copper Canoe, an Aboriginal language media company. He lives in Comox with his wife and two children.
BOOKS: