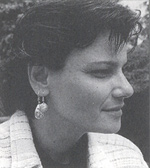 
The Gustafsen Lake standoff. The Oka crisis. The shooting of Connie Jacobs when she refused to give up her children to Social Services. These were some of the subjects for the poetry of Connie Fife when she was living in Victoria. Her poem "A Mother's Son" is dedicated to Jacobs and her nine-year-old son Ty who were shot to death on March 24, 1998 by an RCMP officer on the Tsuu T'ina Reserve in Alberta after Social Services attempted to apprehend Jacobs' three children. No charges were laid.

As a Cree mother and lesbian, Fife viewed Canadians as living in "separate homelands" when she published Poems for a New World (2001). Redolent with anger and sorrow, Fife's poems also extend an invitation for non-Aboriginals to sit "as equal partners at the banquet table of mother Earth." Preceding poetry titles were Beneath the Naked Sun (1992) and Speaking Through Jagged Rock (1999). Born in Saskatchewan in 1961, Fife graduated from the En'owkin International School of Writing and has edited Gatherings, Volume II (1991) and The Colour of Resistance (1994). She has moved from British Columbia to Winnipeg.