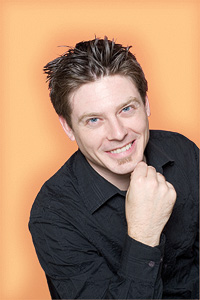 
Magic, monsters and mythology abound in the stories and art of Lee Edward Födi who grew up in the mountains, forests, lakes, and deserts of southwestern British Columbia.

According to supplied promotional material: "Growing up on a farm, Lee Edward Födi was subjected to various horrible chores such as cleaning up after chickens, pigs, geese, and younger siblings. He continually craved adventure and often found himself searching between the cracks of here and there in hopes of discovering an enchanted world populated with magical monsters, talking animals, and other creatures of faerie. Several years later, he had the stroke of good fortune to stumble upon the secret Land of Een and now he is most pleased to have the official title as chronicler of the adventures of Kendra Kandlestar. When he is not chronicling, "Mr. Wiz"; (as he is so often called) spends his time speaking at schools or helping kids sculpt their own stories through creative writing workshops. He enjoys traveling, and especially exploring castles, mazes, tombs, and temples around the world-not to mention tiny places hidden between the cracks of here and there."

In his Kendra Kandlestar and the Door to Unger (Brown Books, $20.95), a giant named Unger enables young Kendra to match wits with dwarves and a magic-wielding faun in order to untangle the truth about her long-lost family in the forbidden land of Een.

Fodi studied at the University of British Columbia and has a degree in English Literature and a diploma in Fine Arts. He is a member of the Society of Children's Book Writers & Illustrators, the Children's Writers & Illustrators of British Columbia, and the Federation of BC Writers. He lives in Vancouver where he is the facilitator and mentor for Dream Workshop, a program designed to unleash the creative energies of children.

PLACE OF BIRTH: Oliver, BC

Kendra Kandlestar and the Box of Whispers, Brown Books, 2005