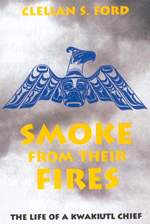 Written prior to an era when academics discussing aboriginals were self-censored by political correctness, Smoke from Their Fires: The Life of a Kwakiutl Chief (1941) is a refreshingly frank and classic account of the life and times of Kwakwaka'wakw Chief Charles James Nowell, mainly written by Clellan S. Ford, of Yale University, when Nowell was age seventy. Ford received some preliminary guidance for the project from Franz Boas. It is a landmark volume because it is the first full-length biography, presented in the form of an autobiography, about a B.C. aboriginal. Based on interviews conducted in 1940, Smoke from Their Fires includes a 40-page introduction to Kwakwaka'wakw culture and some very candid comments from Nowell about sexual behaviour and family customs such as child care. Drawings of a grizzly bear and a killer whale were contributed by Alfred Shaughnessy from Kingcome.

Born in 1870 at Fort Rupert, Nowell acquired the names Charles James from Reverend Hall while attending the Anglican school at Alert Bay. He married the daughter of Nimpkish Chief Lagius around 1895 and received the name Hamdzidagame ("you are the man that feeds other people";).

In 1899, Nowell began assisting freelance museum collector Charles Frederick Newcombe by offering to collect skeletons for him. Despite some antagonism between the two men, Newcombe persuaded Nowell to be among a group of Kwakwaka'wakw and Nuu-chah-nulth who attended an exhibition held in St. Louis in 1904. Their entourage included Nowell's friend Bob Harris from Fort Rupert, the shaman Ateu (or Atlieu), his daughter Annie Ateu and others.

Nowell and his companions appeared in ceremonial regalia at the fairgrounds at Forest Park, five miles west of the Mississippi River, as were billed as representatives of the "singularly light-colored fisherfolk"; of Vancouver Island. Afterwards Newcombe brought Nowell, Ateu and Harris to Chicago for a month where they proved themselves very useful by identifying and describing Kwakwaka'wakw materials that had been gathered by the museum.

Ford is better known around the world for co-writing, along with Frank Beach, Patterns of Sexual Behavior, a 1951 book that explored the sexual behavior of humans and other animals, but in British Columbia literature the ground-breaking sexologist Clellan S. Ford is also significant as the author of Smoke from Their Fires: The Life of a Kwakiutl Chief (Yale University Press, 1941), co-written with Charles James Nowell. Born in Worcester, Massachusetts on July 27, 1909, Clellan Stearns Ford attended Yale University and gained Ph.Ds in Chemistry and Sociology. He spent a year doing field studies on the Fiji islands and began studying the Kwakiutl Indians of Vancouver Island in 1940. His biography of Kwakiutl Chief Charles James Nowell, Smoke from their Fires, is a chronological survey of Chief Charley's life. During World War II, Ford was a Lieutenant in the U.S. Naval Reserve, co-writing military handbooks on Pacific Island groups. He died of cancer at age 63 on November 4, 1972.