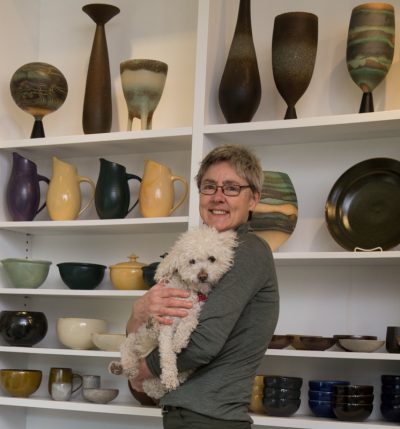 
One of B.C.'s senior potters, Mary Fox wrote: My Life as a Potter: Stories and Techniques (Harbour $44.95), a book that is part memoir, part coming-of-age story and part handbook for ceramicists. Having reached the peak of her craft, Fox's work has been shown in galleries across Canada and internationally.

Vancouver Island potter Mary Fox is known for her textured glazes and the elegant chalices and vases she has made for decades in her Ladysmith studio. The full-page photographs of her exquisite creations are a highlight of her memoir, My Life as a Potter: Stories and Techniques.

Another strength is her frank, matter-of-fact voice as she recounts her story—discovering clay in 1973 as a 13-year-old student in Victoria and finding the love of her life, Heather Vaughan, only to be felled in 1989 by myalgic encephalomyelitis, a mysterious illness that can cause severe chronic fatigue.

Fortunately, Fox recovered enough after five years to continue her work at a reduced and carefully managed pace. Vaughan, a social worker, had more virulent symptoms. Bedridden for years, she relied on Fox as her main caregiver until her death in 2007 ended their 25-year relationship.

The couple’s 1991 relocation from Vancouver to an old coal miner’s cabin in Ladysmith, an hour’s drive north of Victoria, was a survival strategy—it provided an affordable place to live and, eventually, a way for Fox to resume work in her own studio and pottery shop.
My Life as a Potter allows Fox to pass on her hard-won wisdom. She discusses things she wishes she had known when she was starting out, offers a list of “disciplines” she follows in her studio, and sets out some of the techniques she developed over the years.

In the book’s foreword, Carol E. Mayer, head of the curatorial department at the UBC Museum of Anthropology, notes the dwindling number of senior potters in British Columbia, many of whom have not left written records.

“There is a dearth of autobiographies by potters that cover the scope reached in this book,” says Mayer. “Some do provide useful technical information, but the pickings are slim.”

In recent years, Fox has turned her mind to mentoring a new generation of potters. She has launched what she calls her “legacy project”—a residency program in her home that helps emerging potters develop practical skills as studio potters. A charitable society has been established to oversee the house after her death, along with an endowment fund that welcomes donations through the Vancouver Foundation and the Craft Council of British Columbia.
“I have been a potter all my working life, earning my living from what I create with my hands,” Fox writes. “Although I have never regretted my career choice and all the challenges that came with it, I would like to make it a bit easier for future young potters if I can. It is so hard to get started in this field without help: there is the costly equipment needed to do the work, and it is increasingly difficult to find a living space that can accommodate a studio, never mind a landlord willing to let you install a kiln.”

My Life as a Potter does much to demystify the challenges that face creative people of all casts. While it brings together many elements, it hangs together because of its structure—multiple chapters with bite-sized sidebars—as well as effective design and imagery. In many ways, it reflects a potter’s practical mentality—it’s a serial production that comes together as a greater whole, just as individual cups, plates and bowls are laid out to create a welcoming, homespun table setting. 9781550179385

Victoria-based Portia Priegert is the editor for Galleries West and a former reporter for the Ottawa bureau of the Canadian Press.