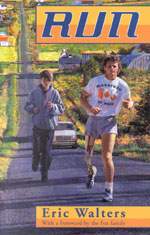 Voted Canada's Greatest Hero in a national survey conducted in 1999, Terrance Stanley Fox of Port Coquitlam was born in Winnipeg, Manitoba on July 28, 1958. Athletic as a youth, he was encouraged by a magazine article brought to his bedside by his former basketball coach the night preceding the amputation of his leg six inches above the knee due to cancer in 1977. This article described an amputee who ran in the New York Marathon. "It was then I decided to meet this new challenge head on," Fox wrote, "and not only overcome my disability, but conquer it in such a way that I could never look back and say it disabled me."

Following 16 months of chemotherapy treatments, Terry Fox began rigorous training for a cross-Canada run to raise money for cancer research. "I'm not a dreamer," he wrote to Canadian Cancer Society. Fox dipped his artificial leg in the Atlantic Ocean in St. John's Newfoundland on April 12, 1980, commencing his Marathon of Hope. He ran 5,373 kilometres in 143 days, reaching Thunder Bay by averaging 42 kilometres (26 miles) per day through six provinces. He was forced to stop running on September 1, 1980 because his primary cancer had spread to his lungs. "When I started this Run," he told a press conference, I said that if we all gave one dollar, we'd have $22 million for cancer research, and I don't care, man, there's no reason that isn't possible."

The following day, the Fox family received a telegram from Isadore Sharp, chairman and CEO of Four Seasons Hotels and Resorts, pledging to organize an annual fundraising run in Terry Fox's name. CTV quickly organized a five-hour telethon that raised $10 million. At a ceremony held in his home, Terry Fox became the youngest-ever recipient of the Order of Canada on September 18. A month later he received the Order of the Dogwood, British Columbia's highest civilian honour. One month after that, the American Cancer Society presented him with the Sword of Hope. And the following month he received the Lou Marsh Award for outstanding accomplishment in Canadian sports. Canadian Press declared Terry Fox was Canadian of the Year. By February of 1981, the Marathon of Hope initiative had reached its objective--$1 for every Canadian--with donations reaching $24.17 million for 24.1 million people.

In 2005, Douglas Coupland, as a long-time admirer of Terry Fox and his legacy, wrote Terry (D&M) published on April 12th, exactly 25 years after Fox began his Marathon of Hope run in St. John's, Newfoundland. For 143 days Terry ran the equivalent of a marathon (42 kilometers / 26 miles) every day. Coupland donated all royalties to the Terry Fox Foundation. "Our family has wanted this book to be published for 25 years," said Darrell Fox, Terry's brother and National Director of the TFF. "We were simply waiting for Doug to call." Coupland's text accompanied 145 photographs "To many people, Terry never stopped running," Coupland wrote. "Day or night he's still near us, passing by the outskirts of the cities we live in, with his strange hop-click-thunk step, forever fine and forever keeping the best parts of ourselves alive, too."

In 2020, Darrell Fox edited Forever Terry: A Legacy in Letters (Viking 2020) to mark the 40th anniversary of the Marathon of Hope. Due in September, it consists of 40 letters recounting the inspiration, dedication, and perseverance that Terry Fox embodied. The contributors include Margaret Atwood, Bobby Orr, Tom Cockrane, Jann Arden and Christine Sinclair, as well police officers who escorted Terry on his run. Royalties will support the Terry Fox Foundation which has raised over $750 million dollars for cancer research.

There is also a kids book, Terry Fox and Me (Tundra), written from the perspective of Terry Fox?s boyhood basketball friend, identified only as Doug, who helped the under-sized Terry earn a spot on his first basketball team and was later ?by Terry's side every step of the way: when Terry received a diagnosis of cancer in his leg, when he was learning to walk - then run - with a prosthetic leg and while he was training for the race of his life, his Marathon of Hope.? With text by Mary Beth Leatherdale and illustrations by Milan Pavlovic, this story for children aged 4 to 8 focuses on friendship and loyalty. 9780735267688