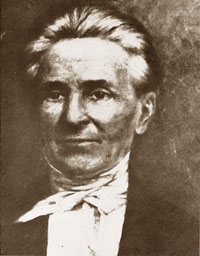 In his annals, Franchère also describes rivalry with the North West Company, the arrival of David Thompson at Astoria and the appearance of the British sloop Racooon in 1813. Franchère's history of the Astorians' activities and his detailed accounts of the interior of Oregon would later prove useful to Washington Irving during the territorial negotiations between the United States and Britain over the Oregon boundaries. The pioneering narrative of Gabriel Franchère has been described by historian W.K. Lamb as "the most informative single record of events at Astoria during the three years in which John Jacob Astor was endeavouring to establish a fur-trading depot at the mouth of the Columbia River."

Gabriel Franchère was born in Montreal on November 3, 1786 as the son of Gabriel Franchère Sr., a merchant, and Félicité Morin (Miron, Marin). A male ancestor had arrived in New France as ship's surgeon from France in the mid-18th century. Educated in Montreal, Franchère was signed into service as a clerk by Alexander McKay for John Jacob Astor's Pacific Fur Company in 1810. In 1809, the German-born Astor had attempted to make a joint venture with the Northwest Company but, when rejected, he organized the American Fur Company to establish operations in the Oregon Territory.

At age 26, Franchère sailed from New York in September of 1810 with 54 men on the Tonquin as a member of Duncan McDougall's contingent, sailing around Cape Horn and visiting the Hawaiian Islands under Captain Jonathan Thorn. Franchère s journal of life at Fort Astoria later refers to the massacre of 17 white men, including Alexander McKay ("an irreparable loss") aboard the Tonquin in Clayoquot Sound in 1811. He notes, "The slaughter of our people was avenged, it is true, by the destruction of ten times the number of their murderers; but this circumstance, that could perhaps gladden the heart of a savage, was little, if any, consolation for civilized men."

After witnessing the transfer of Fort Astoria to the Northwest Company, Franchère worked for the new owners prior to making the 5,000-mile overland journey to Montreal with other Astorians by canoe and on foot, passing through southwestern British Columbia and camping "at the same spot where Mr. Thompson has spend the winter of 1810-11." He married Sophie Routhier on April 24, 1815 and worked in Montreal as the chief agent of the American Fur Company from 1828 to 1834. He later worked at Sault Ste. Marie and started Franchère and Company in New York City. There he also established the Société Saint-Jean-Baptiste for literary readings and to preserve French religion and customs in the United States. Franchère and his wife had eight children in Montreal and Sault Ste Marie, six of whom survived childhood. Sophie died in 1837. An American acquaintance named Benjamin Parke Avery once described him as being “of very simple and correct habits, which insured him good health and cheerful spirits. He possessed a blithe disposition, veined with a kindly humour; was very active and intelligent, exceedingly kind-hearted, true to his adopted country, and had a firm faith in the Christian religion.”

Franchère's Astoria diary, written primarily for friends and family, was extensively edited for publication by a respected Montreal journalist, Michel Bibaud, who made considerable revisions and additions prior to its publication in 1820. He has been republished in numerous editions. Franchère died in St. Paul, Minnesota on April 12, 1863. Franchère Peak in Jasper National Park was named in his honor in 1917.

Although Franchère's activities did not have direct impact on British Columbia, he was representative of the wide-ranging French fur traders of his era, many of whom reached the Pacific Northwest without leaving any literary trail. One of the best-known of these was Julien-Maurice (Jules) Quesnel, born in Montreal on October 25, 1786, who accompanied Simon Fraser to the mouth of the Fraser River in 1808. "There is nothing to be had [in New Caledonia] but misery and boredom," he once wrote. Nonetheless the lake, river and town of Quesnel all bear his name. In 1811 he returned to Montreal where he died on April 12, 1842.

According to the Quesnel Museum: "His father, Joseph Quesnel, was a popular poet, dramatist and composer in addition to being a successful merchant. "Jules studied at the College Saint-Raphael from 1797 to 1799, and then entered the service of the North West Company as a clerk in 1804. In 1805 and 1806 he assisted David Thompson in his explorations, and then was clerk to Simon Fraser on his 1808 journey through what was later to be British Columbia. His time with the North West Company appeared to be a means to an end. In 1809 he sent a rather unhappy letter to his friend Joseph-Maurice Lemothe complaining “My interests oblige me to remain in the North for a long time…despite the little hope there is for a young man at present in this country, I am resolved to continue to its term the career that I had the misfortune to undertake.” He further went on to say...that “although I am of an excellent temperament, I perceive that my health is already declining... Quesnel left the North West Company in 1811 and returned to a world in which he felt more comfortable. Quesnel prospered as part of the merchant class in Montreal, and eventually became a partner in a wholesale company. He married Josette (Marie-Josephte) Cotte in 1816… no record can be found if he and Josette had children. He was part of the establishment and was firmly part of the British institutions that made up the majority of the business community in Montreal at that time. In 1818 he became a member of the prestigious and exclusive Beaver Club whose members were men of the fur trade. Membership was restricted to wealthy merchants who had paid their dues as wintering partners in the fur trade and was limited to 55 members at any one time. He was involved with the harbour commission, he was captain in the militia, was a city councillor and member of the Legislative Council of the Province of Canada. He was buried in the parish church of Notre Dame on the 23rd of May 1842."

Franchère, Gabriel. Narrative of a Voyage to the Northwest Coast of America in the Years 1811, 1812, 1813, and 1814 or, The First American Settlement on the Pacific. Edited by Jedediah Vincent Huntington (New York: Redfield, 1854).

Franchère, Gabriel. Journal of a Voyage up the River Missouri, performed in 1811, by H.M. Brackenridge (&) Narrative of a Voyage to the Northwest Coast of America in the Years 1811, 1812, 1813, and 1814; or the First American Settlement on the Pacific (Cleveland: The Arthur H. Clark Company, 1904). Edited by Reuben Gold Thwaites. A republication of Volume VI in the "Early Western Travels, 1748-1846" series.