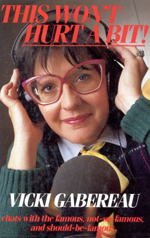 
Born in Vancouver on May 1, 1946, Vicki Frances Gabereau is the daughter of Veryl Fillion and Harry Filion, a photographer for the Vancouver Sun and a crony of Jack Webster. At age 18 she was sent to live with the family of Pierre Berton, another newspaper friend of her father, in the hope the move would improve her grades. She finished high school and married a magician in Toronto named Michel Gabereau. After driving taxi, bartending and organizing concerts, she ran for mayor of Toronto as Rosie Sunrise, a clown--while raising her two children after the break-up of her marriage. An interview during her 1974 campaign against Mayor David Crombie landed her a job as an open-line talk show host for CHIC in Brampton in 1975. She joined CBC Radio in Toronto in 1976. Gabereau worked as a researcher for CBC Radio's Morningside, and filled in as the summer host for Don Harron in 1980. She spent three months as associate producer of CTV's 'Thrill of a Lifetime' and moved to Edmonton to co-host the local CBC morning show with Gail Hulnick. In 1984 she won an ACTRA award for best host-interviewer on radio, having moved back to Toronto and started the radio show 'Variety Tonight'. In 1985, Gabereau made her stage debut in School for Scandal at the Vancouver Playhouse. That year, the format of Variety Tonight was altered and she started an hour-long, week-night interview show from Vancouver called 'Gabereau' on CBC. She continued until January 1986, taking a sabbatical to write This Won't Hurt A Bit!, an assemblage of interviews that contains autobiographical material. She resumed her Gabereau show on CBC Radio in 1988, then switched to a national television talk show for Baton Broadcasting called Gabereau Live!, in 1997. She holds Honourary Doctorates from Athabasca University and Okanagan University College; she's the Honourary Fundraising Chair for the Parkinson Society; she's a board member of the Raymond John Hnatyshyn Foundation; and she frequently hosts community events--including the first B.C. Book Prizes gala in 1985.