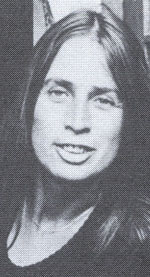 
Maxine Gadd was born as "a red diaper baby" in England on November 12, 1940, just outside of London. "Every time there was an air raid,"; she says, "and the bombs fell, my mother and little brother, Neri and I, would have to get from the sixth floor in the attic, to the basement. My father was away at war at Belgium, eating better than us. My mother used to faint in the street from hunger and anxiety."; She immigrated with her family to Canada in 1946 and lived in a downtown hotel. She attended Kitsilano High School and acquired at B.A. from UBC. She later moved to Galiano Island, eventually returning to Vancouver. Fire in the Cove, published in 2001, is a collection of 24 poems written on Galiano Island from 1977 to 1984. Her three privately published works entitled "Greenstone," "Backup to Babylon," and "Lac Lake" were gathered for Backup to Babylon (2006). The title work describes the politics of Vancouver in the 1980s during the Solidarity movement and the Francis Street Squat. As a follow-up, Gadd published Subway Under Byzantine (New Star, 2008), with more on the Gulf Islands and Downtown Eastside.

Reviews of the author's work by BC Studies:
Subway under Byzantium


Hallucinatory when not nightmarish, richly textured and cheerfully nti-conventional, this collection of three shorter works brings back the late sixties in Vancouver's Downtown Eastside. So did New Star Books take a risk extracting these pieces from the mothballs to give them a fresh exposure? Well, no. Mostly it's energizing to be startled by this bygone craziness.

Who remembers the Woodwards Food Floor? Or who cares to remember? Backup to Babylon is street-smart mythology that frequently champions the poor or the marginalized. Though concrete poetry does not give the same amount of buzz as it once did, the over-the-top rawness (influenced by the Kootenay School of Writing way back when?) is still strikingly original.

Sometimes completely unintelligible-probably purposefully so- Maxine Gadd's poems can also be evocative as in a lovely coastal poem entitled "spring moves fast now."; In another piece about coldness, this one entitled "I will sell my soul? for warm hands,"; the poet evokes hardships that today's neo-hippies could not imagine.
This writing is the opposite of carefully worked finesse. Gadd is anarchic, a poet who likes to "praise bad things."; She writes: "so i / must go for it again / for an answer/ compatible / with my humanity / before daybreak / in the black winter night"; It's good to have her voice recovered and collected. 1-55420-024-5