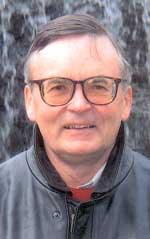 "A heavy drinker and red meat eater, Wallace Gagne was born in Vancouver in 1943 but was forced into internal exile in Calgary during the brass monkey winter of 1951. After graduating from the University of Calgary in 1965, he received his doctorate in political science from the University of Rochester in 1970. A disastrous academic career at McMaster and Simon Fraser University combined with an unfortunated first marriage resulted in four years living underground in Mendocino beginning in 1979. In 1986 he came to Japan to study Aikido and teach oral communication and cross-cultural exchange (fact: he's an English teacher). He has never received an award for his poetry, but in the sixth grade he did get the third-place prize for his Hallowe'en clown costume. Should you wish to complain about any of his work or try to get your money back, you can reach him by email..."