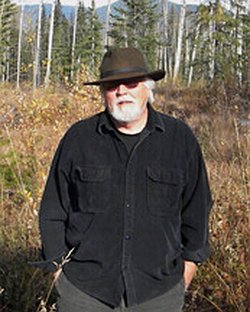 
LITERARY LOCATION: Richfield Courthouse, 14301 Barkerville Hwy 26, Barkerville. Directions: 80 kilometres (50 mi) east of Quesnel along BC Highway 26, the original route of the Cariboo Wagon Road, serviced by adjacent Wells, B.C. The restored courthouse is a 1.6 kilometre-walk from the centre of Barkerville.

Barkerville was once the largest city north of San Francisco and west of Chicago. Among its early citizenry was Wellington Delaney Moses, one of the first black people to arrive in what is now called British Columbia, in 1861, via the Underground Railroad. Born in the Caribbean in 1843, he was a key witness in a murder trial presided over by Judge Matthew Bailey Begbie. As such, Moses was a character in Ann Walsh's juvenile novel, Moses, Me and Murder (1988) and the 'black barber of Barkeville' was featured in Bill Gallaher's third historical novel, Moses: The Curious Life of Wellington Delaney Moses (2003).

A singer-songwriter based in Victoria, Bill Gallaher has portrayed other historical characters from Barkeville such as Cariboo Cameron in The Promise (2011), the true story of a deathbed promise kept to his wife Sophia Cameron, "the Beauty of Barkerville,"; who asked her husband in 1862 to take her body from the frozen goldfields to a tree-shaded cemetery near Cornwall, Ontario; and Catherine Schubert and the Overlanders in The Journey: The Overlanders' Quest for Gold (2002). As well, Deadly Innocent (Touchwood 2004), categorized as creative non-fiction, documents the misfortunes of brothers William, Gilbert and Thomas Rennie who followed the trail of the Overlanders in 1862 with Father Lacombe. Once the brothers reach the Rockies, their dreams of gold rush glory go awry.

In The Frog Lake Massacre (2008), Bill Gallaher follows a young man named Jack Strong who leaves Victoria in 1884 for the prairies and witnesses the deaths of friends during the so-called Frog Lake Massacre, one of the bloodiest events of the Northwest Rebellion. Led by a Cree named Wandering Spirit, Cree warriors dismissed the objections of their chief, Big Bear, and attacked a small town near Frog Lake, Alberta on April 2, 1885, near Fort Pitt on the Alberta/Saskatchewan border, as a protest against the dwindling of the buffalo herds. Nine people were killed, including two Oblate missionaries, Fathers Léon Fafard and Félix Marchand, and the Indian Agent Thomas Quinn. The Frog Lake Massacre is the first of a trilogy that includes The Luck of the Horseman and The Horseman's Last Call.

John Ware is a little-known Canadian legend who found great success in the late 1800s as an Alberta cattle rancher. Known for his exceptional horsemanship, physical strength and good nature, Ware also happened to be born a slave on a South Carolina rice plantation in 1845. High Rider (Touchwood, 2015) is a historical novel that explores Ware's journey that took him from the Deep South to Texas and Montana and finally, to Alberta. As a child, Ware received no formal education but he did learn to ride mules bareback, which served him well in his later role as a cowboy. After attaining his freedom at the end of the Civil War, Ware began herding cattle north from Texas towards Montana. Then a position with the famed Bar U Ranch in Alberta brought Ware to Canada, where he married, had children and started his own cattle ranch. Through fact-based fiction, High Rider explores the compelling story of Canada's first black cowboy.

Bill Gallaher was born and raised in Vancouver and has held an array of jobs throughout his life. Of the numerous books pertaining to Barkerville since Fred W. Ludditt's Barkerville Days (1969), the most noteworthy historical title is Richard Wright's reprinted Barkerville and the Cariboo Goldfields (2013).