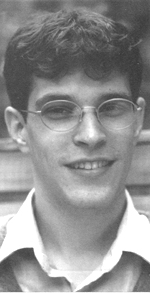 
"I often wonder how writers who write about their own lives do it." -- Steven Galloway.

Steven Galloway was born in Vancouver in July of 1975. His first novel Finnie Walsh (Raincoast 2000) was nominated for the Books in Canada/Amazon.com First Novel Prize. It's a warm, witty and cock-eyed story about two friends who met as third-graders in 1980. From the outset, the narrator Paul Woodward lets the reader know the title character named Finnie will die. This story about teenagers and hockey was followed by Ascension (Knopf, 2003), a novel about a 66-year-old Romany tightrope walker, Salvo Ursari, who attempts to walk a wire strung between the twin towers of the World Trade Center, 1350 feet above the ground.

In his highly touted third novel, The Cellist of Sarajevo (Knopf, 2008), Steven Galloway took his title and cover photograph in reference to a real life who played classical music among the rubble. The novel refers to an unnamed cellist who risks his life to play Albinoni's Adagio once a day, for 22 days, to commemorate 22 people who he saw killed by a mortar attack as they were standing in a line-up to buy bread. Each day when he revisits the point of impact for his performance, he is protected by a gifted female sniper named Arrow who has been assigned to protect him. But that's really only a small part of the story.

Set during the siege of Sarajevo in the 1990s, the novel chiefly portrays a loner named Dragan who trades bread for shelter, and a family man named Kenan who must make a weekly trek through the war-torn streets to get water for his family. The photo of the real-life cellist on the cover of the book, used without the permission of knowledge of the cellist in order to galvanize attention for a novel that was not chiefly about the cellist at all, only gained critical attention longer after its publication. The Cellist of Sarajevo received the 2009 George Ryga Prize for best book by a B.C. author about social issues.

Writing in Dooney's Cafe, critic Stan Persky has summarized: "In the wake of a mortar explosion in beseiged Sarajevo that killed 22 Bosnian civilians as they queued to buy bread, a cellist who lived nearby, Vedran Smailovic, decided to defy the city's tormenters -deadly enemy snipers - by playing his cello for 22 successive days in the rubble of the atrocity. The work he performed is a piece known as "Albinoni's Adagio,"; and it, too, has a story of its own, a morally ambiguous one about whether it's an authentic or fraudulent composition, which Galloway briefly discusses. The vignette about the cellist of Sarajevo occupies only a few pages at the beginning of Galloway's novel, and the rest of the book is a fictional exploration of the life-and-death moral dilemmas faced by the citizens of Sarajevo, based, I gather, on extensive interviews Galloway conducted with inhabitants of the Bosnian capital.

"An artist-friend of Galloway's, Deryk Houston, who also happened to know the real cellist of Sarajevo, Smailovic, suggested to the Canadian author, who was 32 at the time, that he should inform the cellist about his literary project, and perhaps offer him remuneration. When Galloway replied that he didn't see the need to do so, Houston wrote to Smailovic, who had in the intervening years moved to Northern Ireland, where he lived a rather reclusive life, to tell him about the book rather than having him only learn of it when it appeared in bookshops. Though Galloway eventually sent the cellist an inscribed copy, Smailovic was furious at what he regarded as the theft of his name and identity, an act of cultural (mis)appropriation.

"The story has a more or less happy denouement. Some time after the personal controversy ignited, Houston offered to accompany Galloway to Northern Ireland to meet the cellist. Galloway agreed, and eventually, in a hotel pub, after some awkward moments (Smailovic refused to shake hands with the writer), Smailovic got some of his anger off his chest, the Guinness flowed, as did the conversation, and in the end the musician and the novelist shook hands. (Cf., Deryk Houston, "Vedran Smailovic - 'The Cellist of Sarajevo',"; The Economic Voice, Jan. 27, 2012; David Sharrock, "Out of the war, into a book, and in a rage,"; The Australian, June 17, 2008.)"

Stan Persky generously suggest that because the two men shooks hands for a moment after imbibing, Galloway can be exonnerated.

For The Confabulist (Random House 2014), Galloway revisits the sudden death of Harry Houdini to also explore the man who killed him--twice--Martin Strauss. It is described as a novel about fame and ambition, reality and illusion, "and the ways that love, grief and imagination can alter what we perceive and believe."

A resident of New Westminster, Galloway worked as a sessional instructor at UBC's Creative Writing Department, which he attended, before becoming its Acting Chair. He previously attended the University College of the Cariboo. Soon after he became Chair of the UBC Creative Writing Deparment, Galloway was embroiled in a high-profile controversy as to whether or not he had engaged in sexual impropriaties and/or abused his power as a high-ranking faculty member. The university removed him from his post.

Collectively, Galloway has won the Borders Original Voice Award, the OLA Evergreen Award, and the George Ryga Award for Social Awareness in Literature and has been nominated for the International IMPAC Dublin Literary Award, the Scotiabank Giller Prize, the Richard & Judy Book of the Year Award, the Ethel Wilson Fiction Prize, the Canadian Booksellers Association Fiction Award, and the Amazon.ca/Books in Canada First Novel Award. His work has been published in over thirty countries

Articles: 2 Articles for this author
The Cellist of Sarajevo by Steven Galloway (Knopf $29.95)
Review


A recent essay by well-travelled B.C. novelist Jim Christy complains that many people nurtured by creative writing programs lack sufficient "real world"; experience to produce believable fiction. Depicting the human condition within a war zone minus political context, The Cellist of Sarajevo by Steven Galloway could serve Christy as a case in point.

No less than 2003 Nobel Prize winner J.M. Coetzee has recommended it "a gripping story of Sarajevo under siege,"; but The Cellist can be dismissed as an exercise in imagination, lacking memorable characters.

Kenan, a forty-something family man, risks his life every four days to retrieve fresh water for his family. Dragan, a 64-year-old bakery worker, survives as a loner. And a young female sniper protects the cellist whenever he plays Albinoni's Adagio to honour the dead. Her name is revealed in the final sentence.

The title and its intriguing cover photo of a tuxedo-clad cellist in the rubble are referenced in an afterword:

"At four o'clock in the afternoon on 27 May 1992, during the siege of Sarajevo, several mortar shells struck a group of people waiting to buy bread behind the market on Vase Miskina. Twenty-two people were killed and at least seventy were wounded. For the next twenty-two days Vedran Smailovic, a renowned local cellist, played Albinoni's Adagio in G Minor at the site in honour of the dead.";

It makes for great jacket copy but Galloway's cellist-unnamed-is at best a supporting character.

Previously composer David Wilde had written a cello piece recorded by Yo Yo Ma called "The Cellist of Sarajevo.";

Ten years ago, Elizabeth Wellburn and artist Deryk Houston of Victoria collaborated with Smailovic for a fictional children's picture book about the cellist, Echoes from the Square (Rubicon). Smailovic now lives in Northern Ireland.
978-0-307-39703-4

Creative writing teacher Steven Galloway has apologised for an affair with a student, but complainant insists he has not fully addressed his 'abuse of power'

The main complainant involved in the sacking of author Steven Galloway from his job at the University of British Columbia has denied that her complaints were about a two-year consensual affair between the two of them, as his lawyer had announced last week.

Galloway, the author of The Cellist of Sarajevo, was fired from his role as creative writing chairman at UBC in June, after being suspended pending investigation for "serious allegations'' in November 2015. When one of several allegations was found to have been substantiated by the investigation, Galloway was fired; since then, UBC has repeatedly said that it could not reveal details of the alleged offence without the author's consent, or they would be in breach of privacy laws.

The case made international headlines last week when more than 80 Canadian authors, including Margaret Atwood, Madeleine Thien and Yann Martel, signed an open letter voicing concerns over how the university had handled his dismissal.

But on 23 November, Galloway issued a public statement through his lawyer for the first time since his suspension, confirming that he had been accused of numerous incidents of misconduct, including sexual assault. However, the statement said that the only substantiated allegation found in the investigation by former state judge Mary Ellen Boyd was that he had a two-year affair with a student. Both Galloway and the student were married at the time.

"Mr Galloway profoundly regrets his conduct and wishes to apologise for the harm that it has caused. He does not seek to minimise it or to hide from it,"; the statement said.

Galloway's statement said that the investigation dismissed all the other allegations, including the claim of sexual assault in 2011. "He seeks fair treatment for all involved, and an end to the scurrilous assertions and accusations that have proliferated in the vacuum of information,"; the statement continued.

However, the student involved, identified only as MC or main complainant, later also released a statement through her lawyer. She claims that her report to UBC had not been over a consensual affair, but that Galloway had sexually assaulted and sexually harassed her.

"Mr Galloway has issued an apology. But he wouldn't appear to be apologising for the finding he has admitted was made against him by Ms Boyd, which was misconduct for 'inappropriate sexual behaviour with a student': conduct which is an abuse of trust and his position of power,'' the statement said.
Sign up to our Bookmarks newsletter
Read more

"Mr Galloway has not made clear to whom he is apologising or what he regrets, other than presumably the consequences to him. His reference to ... the events does not explicitly consider the devastating impacts of abuse of power on women affected.";

UBC told the Guardian it would not be making a statement, and referred to its conflict of interest policy, which states that faculty members must avoid or declare relationships with their students, and that they should not grade or supervise a student with whom they have a personal relationship without declaring it. It previously said the investigation had revealed "a record of misconduct that resulted in an irreparable breach of trust";.

In October, Thien wrote a separate letter to UBC saying that Galloway had experienced severe distress since he was fired. She stressed that she was not taking the allegations lightly, having herself "known the terrible and lasting pain of sexual assault";. But, she told the Guardian: "My belief in due process and my belief in survivors are both parts of me, and I cannot sacrifice one for the other. It would be like ripping myself in two.";
The Guardian