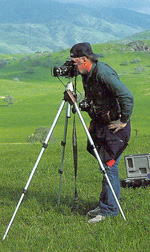 
Born in Toronto in December of 1948, former geologist and CPR locomotive engineer John F. Garden was raised in Calgary (1949-1974) and educated at the University of Calgary. While based in Revelstoke, he retired from the CPR and formed Footprint Publishing in 1984. After preparing two lavish coffee table books, The Selkirks and The Bugaboos, his third mountain book was The Guiding Spirit by American mountaineers Andrew Kauffman and William Putnam. It's about 36 Swiss mountain guides hired by the CPR to help open the Rockies and Selkirks for tourism, most notably Edward Fenz Jr. John Garden also wrote and published The Palliser Triangle: A Tale of the Canadian Grasslands (Footprint Publishing), and another coffee table book called British Columbia Rail: From PGE to BC Rail (Footprint, 1995).

Perhaps his most important books are two representations of the work of CPR photographer Nicholas Morant. First published in 1992, his Nicholas Morant's Canadian Pacific was into its fourth printing by 1999. The year before he released Nicholas Morant's Canada. The Crow and the Kettle: The CPR in Southern British Columbia and Alberta, 1950-1989 (2005) looks at the modern era of the famous rail line that ran from Medicine Hat to a switch on the CPR mainline at Odlum, then across the Fraser River from Hope. Built by way of the Crowsnest Pass, Kettle Valley and the Coquihalla Pass, the all-Canada route was designed to thwart American interests in southern B.C. It crossed three major rivers and seven mountain summits.

Review of the author's work by BC Studies:
Nicholas Morant's Canadian Pacific


In 1991, a Revelstoke railway employee named John Garden produced Nicholas Morant's Canadian Pacific, a lavish tribute to the picture-perfect railway images Morant made for his long-time employer, the CPR.

Garden's second volume of Morant's public relations work, Nicholas Morant's Canada (Footprint $69.95), portrays other facets of the CP conglomerate. For anyone with a critical eye, it's a beautiful and unsettling book.
Whereas the Soviet Union encouraged propagandist art called socialist realism, corporate North America has generated idealizations called advertising. Penticton-born Nicholas Morant was one of the foremost and prolific artisans of the latter genre.
At once a perfectionist and a trickster, Morant is possibly this country's 'most seen' and most widely published artist. His frequently staged photographs were seen around the world and some were the basis for Canadian stamps and bills.
Garden's chronological text steers clear of these ideas. Given permission to reproduce pictures from Morant's private collection, as well as Morant's memoirs, Garden has mainly extolled the virtues of his subject's character and work. This approach mirrors the astonishing perfection of Nicholas Morant's superbly crafted pictures.
Nicholas Morant, the first child of impoverished English gentry, was born in Penticton in 1910. He grew up on a fruit farm. His parents sacrificed to send him to University Military School, now known as University St. Michael's, in Victoria.
With few prospects, Morant was fortunate to land a $90 a month job with the CPR's public relations department in 1929. Morant was hired due to the intervention of a school chum, Jim Coleman (the venerable sportswriter), whose father was vice-president of the CPR in western Canada.
Moonlighting as a freelance photographer for both Winnipeg dailies, Morant lived in a small downtown hotel, the St. Regis, where he developed his pictures under the shoe shine stand. Morant used a homemade enlarger and washed his film in the men's room next to the beer parlour.
To get scoops around town, he paid taxi drivers and two ladies of the night as tipsters. The famous editor of the Winnipeg Free Press, J.W. Dafoe, first appreciated his talent. After a brief departure from the CPR, Morant was hired back as the 'Special Photographer'.
For the rest of Morant's adult life, excluding a stint serving the war effort as a photographer on loan to the government, Morant mostly produced splendid portrayals of the Canadian landscape, industrial progress and tourist destinations. Mauled by a grizzly attack in 1939, he recovered and was assigned by the Canadian government to photograph the construction of the Alaska Highway in 1942.
Morant's photo of the faked assembly of a Canadian artillery piece, as supposedly unveiled by Minister of National Defence C.D. Howe, was the basis for Canada's 50-cent stamp.
Morant and his wife, who doubled as his assistant, presented countless slide shows with music called 'A Talk Without Words'. Later Morant assisted with several Hollywood film productions involving CPR trains, most notably Silver Streak, Superman II and Days of Heaven.
During his 50-year career he served under nine different CPR presidents. In 1990, following the death of his first wife, Nicholas Morant remarried. That same year he became only the second photographer, after Yousuf Karsh, to be invested as a Member of the Order of Canada.
Nicholas Morant now lives in Banff, afflicted with Alzheimer's. Thanks to John Garden, his thousands of pictures will not be forgotten. It is Garden's fifth coffee table book since he founded Footprint Publishing in 1984. 0-9691621-6-2p