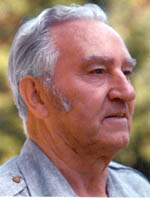 
One of B.C.'s most successful self-publishers, ex-logger Joe Garner of Nanaimo, died on October 27, 1998. He was born in a log-built tool shed on Saltspring Island on February, 11, 1909. After Oolichan Books published Garner's first memoir in December of 1980, Never Fly Over an Eagle's Nest, Garner regained his copyright and reprinted a revised version in 1982 under his own Cinnabar Press imprint. "The big thing about publishing is promotion,"; he said. "If you don't do advertising, forget it."; Garner was well-known for his sales trips around the province in his van, persuading merchants to carry his memoirs. A notorious self-promoter, he was also a good storyteller with broad knowledge of the B.C. outdoors and business. Other Cinnabar titles, all made available from Sandhill Distributing, were Never a Time to Trust (1984) and Never Chop Your Rope (1988). His views of forest mismanagement resulted in Never Under the Table (1992). His final work was Never Forget the Good Times (1995). Never Fly Over An Eagle's Nest was reprinted by Heritage House in 2003. It recalls Garner's childhood after his father Oland was supposedly run out of South Carolina by the Ku Klux Klan in 1903, arriving in Victoria via San Franscisco. Garner's father helped Emily Carr build her house in Victoria and Joe Garner recalls sleeping between the artist's two sheepdogs, plus encounters with a cougar, high-stakes poker and later trips to the Queen Charlotte Islands and the Chilcotin as Garner and his brothers worked in logging. This book was reportedly printed 26 times between 1980 and 1998.

Articles: 1 Article for this author
Never Chop Your Rope
Article


"The big thing about publishing, says logger and author Joe Gamer, 79 "is promotion. You can't be a dreamer. You have to get out there and talk to people. "I just came back from Cassiar and the Alaska Highway and sold out all the books I had. When I go north on a trip I sometimes sell as many books in a day as some people sell in a lifetime.

"And if you don't do advertising, forget it."

Garner can talk. With his two tell-it-like-was memoirs about B. C. pioneering and wildlife, Never Fly Over an Eagle's Nest (1980) and Never a Time to Trust (1984), he says he has combined sales of 64,000 copies. A third Joe Gamer book with another "never" title, Never Chop Your Rope, is available this fall.

A garrulous self-promoter, Gamer went so far as to buy back the publishing rights to his first book in 1982 after it had sold over 10,000 copies. He then republished the book under his own imprint, Cinnabar Press, and has become a firm believer in the self publishing process, "It is more profitable than trying to exist on royalties," he says, "You do have control. And if you have enough common sense you can profit from your own hard work.

"We have travelled across Canada twice in our motor home, calling on book outlets, the news media and book review people. We get repeat orders from over 70per cent of these contacts. But the most gratifying thing about such trips is the people you meet.

"I find a good book is a wonderful thing to barter with. At $9.95, it seems to be a natural thing to swap one for R. V. campsites or other commodities."

Whether he uses the barter system or the capitalist system, Gamer now easily ranks as one of B.C.'s bestselling writers. His distributor, Gordon Soules, calls Gamer "the king of the self-publishers." Garner, unlike many self-publishers, hires top notch editorial and design assistance to ensure his books are professional in every way. From his self-built log home south of Nanaimo, Joe Garner is now mounting a publicity campaign for Never Chop Your Rope, his memoir about the people he met in the logging business, both on the Coast and in the Interior.

Between 1926 and 1970, Garner worked throughout the logging industry, running up to half a dozen logging camps at a time, accumulating over 3,000 hours as a floatplane pilot. "It was no picnic," he says, "Your first thrill was when you took your first solo flight. Your second thrill was when the motor quit."

Garner kept track of his adventures in his diaries for 40 years. With the aid of those diaries; flight logs and old photos, he says his memory of the distant past is sharper than his memory of recent events.

"I remember one camp in particular," he says, "We were working out of Duncan at the Foulger Creek logging Co. in 1954. We had this operation southwest of Alert Bay in Johnstone Strait. Bad markets and bad timber made us lose $100,000 in a matter of months."

It's a sure bet he'll be recovering some of those losses with his memories in Never Chop Your Rope.