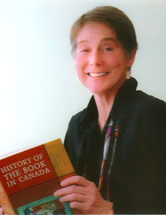 
Carole Gerson (BA Simon Fraser, MA Dalhousie, Ph.D British Columbia) is one of the most prolific and influential English professors in British Columbia, having co-edited (with Jacques Michon, at l'Université de Sherbrooke) volume III of the History of the Book in Canada / Histoire du livre et de l'imprimé au Canada. To complete the undertaking, Gerson co-coordinated more than 100 contributors in two languages over a six-year period to cover Canadian writings from 1918 to 1980. The overall three-volume project was made possible with a $2.3-million grant from the Social Sciences and Humanities Research Council of Canada (SSHRCC).

Gerson previously specialized in the study and appreciation of works by early Canadian women writers, including Pauline Johnson, and Canadian publishing history. Winner of the Raymond Klibanksy Prize, Gerson is a Fellow of the Royal Society of Canada and recipient of the Dean of Arts' Medal for Academic Excellence (2002).

"Reframing a National Literary History: Canadian Writers in the International Sphere, 1830-1910."; Found in Global Realignments and the Canadian Nation in the Third Millennium (Harrassowitz, 2010)

Paddling Her Own Canoe: Times and Texts of E. Pauline Johnson (Tekahionwake). Veronica Strong-Boag and Carole Gerson. Toronto: U of Toronto Press, 2000

A Purer Taste: The Writing and Reading of Fiction in English in Nineteenth-Century Canada. Toronto: U of Toronto Press, 1989

ALSO: Carole Gerson introduced and annotated Agnes Maule Machar's Roland Graeme: Knight, first published in 1892 and reissued in 1996. She has been at the forefront of research into early Canadian female authors, overseeing a reference site from Simon Fraser University on the subject. Their biographies are available on-line at www.lib.sfu.ca/canadaswomenwriters.

Articles: 3 Articles for this author
Paddling Her Own Canoe: The Times and Texts of E. Pauline Johnson (UTP $24.95)
Info


Novelist Ethel Wilson never forgot her meeting with Pauline Johnson, acknowledging she "pursued a path of her own making, and did this with integrity until the last day of her life."; Johnson advocated outdoor exercise for women and stressed the legal importance of being born in Canada and forging a separate Canadian identity. She remained financially independent, unmarried and dedicated to her artistry on stage and in print.

Paddling Her Own Canoe: The Times and Texts of E. Pauline Johnson (UTP $24.95) by Veronica Strong-Boag and Carole Gerson discusses the poet, feminist, nationalist and Indian advocate against the cultural backdrop of Canada at the turn of the 19th century. After Johnson moved to Vancouver in 1909, the Pacific Coast Women's Press Club welcomed her and proclaimed, "It is very true that the hand that rocks the cradle rules the world, but is it not also true that the hand which wields the pen directs the world.";

Before Johnson died of breast cancer at the age of 51, she specified she wanted only to be remembered in the hearts and minds of her readers. A monument was nonetheless erected in Stanley Park at Third Beach. 0-8020-8024-3

History of the Book in Canada
SFU promo article (2007)


It has taken six long years, but one of this country's great scholarly projects is now complete, with the recent publication of The History of the Book in Canada/Histoire du livre de l'imprime au Canada, Volume III. Co-edited by SFU English professor Carole Gerson with the University of Sherbrooke's Jacques Michon, Volume III (U of T Press/les Presses de l'Universite de Montreal, 2006) covers writings from 1918 to 1980. It's completion involved research and analysis by students and post-doctoral fellows working in both official languages across the country.

The entire project, published in both official languages, was made possible with a $2.3-million grant from the Social Sciences and Humanities Research Council of Canada (SSHRCC). The three volumes span topics from Aboriginal communication systems established prior to European contact to the arrival of multinational publishing companies. Each volume observes developments in the realms of writing, publishing, dissemination, and reading, illustrating the process of a fledgling nation coming into its own. The third and final volume sees book history and print culture as it was affected by major changes in the 20th century, including the country's growing demographic complexity and the rise of multiculturalism. It pays due attention to multifarious developments in print culture, including book prizes, sports writing, pulp magazines, the alternative press, Coles Notes, the international success of romance publisher Harlequin, and the unprecedented influence of Les Insolences du Frère Untel, the famous cry for education reform in 1960s Quebec.

Gerson credits associate editor Janet Friskney, the University of Toronto's Patricia Fleming, McGill's Yvan Lamonde and "our fabulous project manager Judy Donnelly in Toronto"; for keeping the project on track. But she saves her final kudos for her graduate research assistants Nancy Earle, Alison McDonald and Jef Clarke. "They were all such eager beavers, I was very fortunate.";


Embarrassments in our Literary History by Carole Gerson
Reckoning 07 essay


What do we do with the embarrassments in our literary history? A case in point is the three novels by Alex Philip.

American-born Alex Philip (1882?-1968) and Myrtle Tapley Philip (1891-1986) are now mythologized as the "fearless pioneers"; whose opening of Rainbow Lodge at Alta Lake in 1915, following the arrival of the PGE railway in 1914, initiated tourism in the Whistler Valley. The names of both are commemorated in current Whistler landmarks: the site of Rainbow Park preserves some of the resort's early cabins and photographs, and a local elementary school is named after Myrtle, to honour her long record of community involvement.

Alongside the hard work of enlarging and managing the resort, which offered fishing in summer, skating in winter, and by 1948 had reputedly become the most popular honeymoon destination west of Jasper, the ever entrepreneurial Alex found sufficient time and energy to pen three novels which exemplify the clichés of Western romance, transported to the coastal and interior landscape of BC: The Crimson West (Toronto: Thomas Allen, 1925), The Painted Cliff (Ottawa: Graphic, 1927), and Whispering Leaves (Ottawa: Graphic, 1931). Philip's first title became the basis of Canada's first talking film, The Crimson Paradise, made in Victoria in 1933, and now declared lost.

My curiosity about Philip's books turned to dismay when I actually read them. In his efforts to exploit the BC landscape to create popular adventure fiction, Philip employed nearly every offensive stereotype of his age. The plot of The Crimson West is furthered by nasty labour organizers, unpleasant immigrants from eastern Europe, and deceptive Natives. The villain of The Painted Cliff is a "crazed chieftan"; with a gorgeous granddaughter who also loses her reason when deserted by her white lover. Whispering Leaves includes Mexicans and "Chinamen"; who smuggle drugs and Asian labourers into the Cariboo. Of course most of the women are amorous wimps in need of rescue. Reviews preserved in the Myrtle Philip fonds in the Whistler Museum and Archives indicate that the books were generally well received, notwithstanding a few cavils about their amateurishness and stretching of credibility. The reviewer for the Montreal Star described The Painted Cliff as "a really excellent yarn"; by "a veritable Rider Haggard of the Pacific Coast,"; and commented that "the mountains of British Columbia can be made into as good a backdrop for the bizarre as anything in South Africa.";

It might be fun to examine the ways that Philip romanced the West by importing popular adventure conventions into a BC landscape full of local details about railroads, logging, prospecting, and agriculture, and to analyze his construction of Anglo-Canadian-American masculinity (the rugged hero wins all the fist fights). His gratuitous racism and sexism could be studied as representative of the common mindset of the 1920s. But - who needs to know about him? These books are clearly not candidates for resurrection for the general reader. And I don't think that undergraduates would get much out of them. If the racism of the 1920s is on the curriculum, students can read Hilda Glynn-Ward's notorious novel, TheWriting on the Wall (1921), which was turned into an historical document when it was reissued in1974, with an introduction by Patricia Roy, in the social history of Canada series edited by Michael Bliss for the University of Toronto Press.

What initially seemed to be an interesting discovery in relation to the literary history of BC - and a potential contribution to an historic identity for Whistler that is unrelated to the current Olympic frenzy - is now destined to gather dust in a remote corner of my bookshelf. I went out of my way to acquire copies of all three books, as two were published by Graphic, a small Ottawa press (1924-32) that is now memorable for its efforts to create attractively designed books that were "100 p.c. Canadian."; My copy of Whispering Leaves wears its original dust jacket, whose elegant unsigned front and spine illustrations - featuring vegetation that looks surprisingly tropical - are considerably more appealing than its contents. I may show the volume to students as an example of a nicely made book, but I'll probably stop short of recommending that they actually read it.