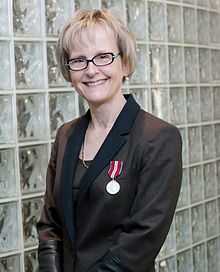 
Anne Giardini, Q.C., is the second B.C. author to be chosen to be the Chancellor of a university. Her mother, the author Carol Shields (1935-2003), served as chancellor for the University of Winnipeg from 1996 to 1999. An announcement was made in April of 2014 that Giardini would be installed as the eleventh SFU Chancellor, taking over from outgoing Dr. Carole Taylor in June of 2014. Anne Giardini had served on SFU's board of directors from 2009 to 2014.

Anne Giardini has a BA in economics from SFU, LLB from UBC and LLM from Cambridge University (Trinity Hall). She was called to the B.C. bar in 1985, the Bar of Ontario in 1990 and the Washington State bar in 2009. She was president of the forestry giant Weyerhaeuser Company Limited from 2008 to 2014, having joined Weyerhaeuser in 1994. She became a Canadian vice-president and served as its general counsel. (The U.S.-based company bought what was then Canada's largest lumber company, MacMillian Bloedel, in June of 1999.)

Giardini received the Queen Elizabeth II Diamond Jubilee Medal in January of 2013 for her fundraising efforts for Plan Canada's "Because I'm a Girl"; campaign, which supports females in Tanzania, and won a Lexpert Zenith Award in 2013 as well as the Robert V.A. Jones Award in 2011. Giardini was a board member of the Federal Advisory Council for Promoting Women on Boards in 2013-2014. She has also been well-connected with the literary community, serving as chair of the Vancouver International Writers Festival, as a board member of the Writers Trust of Canada and on various literary juries.

In November of 2015, Giardini received a lifetime achievement award at the Bi-annual Western Canada General Counsel Awards in Vancouver. It was presented "to a senior member of the in-house legal bar who retired from practice or business during 2013-2015."

Born in 1959 as Carol Shield's eldest daughter, the second of five children, with a father who was Dean of Engineering at University of Manitoba, Giardini has somehow found time to follow her mother's career path as a novelist.

Promoted as witty and deeply-felt, her first novel, The Sad Truth About Happiness (HarperCollins, 2005), concerns family, love, work, friendship and loyalty. Shortlisted for the Amazon/Books in Canada First Novel Award in 2006 and for an Audie audio books award, The Sad Truth About Happiness is set in Vancouver. It was written while Anne Giardini's mother was battling breast cancer.

Publisher's promotional material states, "Maggie is 31 years old, single and solvent. As the perfect middle child of eccentric parents, Maggie has allowed herself to become a cool observer rather than an engaged participant in her own life. Only when she accepts her roommate Rebecca's invitation to complete a magazine quiz does Maggie's outlook begin to change. She answers the question "Are you happy?"; with "no,"; a response that threatens to shave decades off her life. In fact, the quiz predicts that Maggie has only three months to live. Maggie's sisters-stormy Lucy, who has just returned from Rome pregnant and unmarried, and self-absorbed Janet, who has found contentment in a single daily pill-distract Maggie from seeking her own measure of happiness. But when it appears that Lucy will lose custody of her newborn child, Maggie is forced into action. On the road with baby Philip, Maggie is helped by a succession of women who speed her, like a heroine on an old-fashioned quest, on her way. Is Maggie's journey the route to happiness, or is happiness simply too mysterious, too elusive to lend itself to capture?"

Her second book, Advice for Italian Boys, is set in a suburb north of Toronto and in Italy. It owes much to the fact that she married into an Italian Canadian family.

Given that she has never been able to devote herself to writing on a full-time basis, Anne Giardini told the Vancouver Observer in 2009, "I often think writing is like making a quilt. Women that who make beautiful quilts start with the quilt in their brain but it's made piece by piece over time. I start out with the image of the complete quilt and then everything I do fits into that framework."

As for following in her famous mother's footsteps, Giardini recalls one piece of advice she received from her mother in particular: "Always be as intelligent as you are." Given that Carol Shields was also generous with her advice and encouragement for other writers, Anne Giardini and her son Nicholas Giardini co-edited Startle and Illuminate: Carol Shields on Writing (HarperCollins $29.95), a collection of literary advice and opinions drawn from her mother's correspondence with other writers, essays, notes, comments, criticism and lectures. At the time of publication, Nicholas Giardini was one of Carol Shields' twelve grandchildren.

Simon Fraser University's Board of Governors has announced that forestry executive, lawyer and writer Anne Giardini, Q.C., will become the university's 11th chancellor in June, 2014.

Ms. Giardini will be installed as chancellor on June 13, when the term of the current chancellor, Dr. Carole Taylor, concludes. Dr. Taylor has served as SFU chancellor since June, 2011.

"I am very honoured to have been selected for this prestigious position, and am tremendously energized by SFU's vision to be Canada's most community engaged research university,"; says Ms. Giardini. "A chancellor plays a unique role, and I plan to be a tireless advocate for SFU's students and alumni, and the vital contributions they make to B.C.'s economic prosperity and social well-being.";

"We are exceptionally fortunate to have a leader of Anne's stature and reach across industry, community service and the arts join SFU in this capacity,"; says chair of SFU's board of governors, Lynda Brown-Ganzert, who led the university's chancellor search committee. "Anne's deep knowledge of SFU, coupled with her keen understanding of how a university education prepares graduates for success in today's dynamic economy, will be significant assets to SFU as it approaches its 50th anniversary in 2015, and beyond.";

Simon Fraser University is consistently ranked among Canada's top comprehensive universities and is one of the top 50 universities in the world under 50 years old. With campuses in Vancouver, Burnaby and Surrey, B.C., SFU engages actively with the community in its research and teaching, delivers almost 150 programs to more than 30,000 students, and has more than 125,000 alumni in 130 countries.