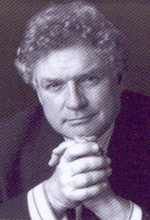 
Born in Vancouver in 1937, Gordon Gibson is the son of timber baron Gordon Gibson Sr. who has been the subject of a novel by Ernest Perrault and an autobiography called Bull of the Woods.

Gibson Jr. attended UBC where he gained his B.A. Honours Mathematics and Physics in 1959 and Harvard Business School where he gained his MBA in 1961. He next studied at the London School of Economics. He was Assistant to the Minister of Northern Affairs (1963-68), Executive and Special Assistant to Prime Minister Pierre Trudeau (1968-72), a federal Liberal candidate in three elections and B.C. Liberal Party Leader (1975-79). He received an MBA from the Harvard Business School and accepted a position with the right wing think tank as Senior Fellow in Canadian Studies in 1993. He subsequently wrote a book on federalism in consideration of Quebec's possible plans to secede, Plan B: The Future of the Rest of Canada (Fraser Institute, 1994) and its follow-up, Thirty Million Musketeers (The Fraser Institute, Key Porter, 1995), in which he incorrectly predicted the imminent splintering of Canada and outbreaks of violence. Increasingly veering away from his earlier liberalism in favour of Fraser Institute ideas, Gibson published Fixing Canadian Democracy (Fraser Institute, 2003). His other titles include What if the Wheels Fall Off? and The Case for the Constituent Assembly.

Review of the author's work by BC Studies:
Bull of the Woods: The Gordon Gibson Story