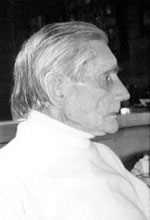 "I have read a lot about Indians, but Gibson's moving narrative has made me aware of my ignorance."; - E.D. Ward-Harris, The Daily Colonist, 1972

After John Frederic Gibson and his wife emigrated from England in 1957, he worked among Aboriginals for much of his professional life in Canada. By 1963, they were living in Smithers, and he was working for the Federal-Provincial Committee on First Nations welfare. The job included writing a report on conditions on eight reserves in the Skeena River/Babine Lake areas. These experiences led to a novel about a government worker in a northern B.C. First Nations community who becomes overly involved in the welfare of one Aboriginal girl in particular, File On Helen Morgan (1968), and his noteworthy non-fiction book, A Small and Charming World (1972).

John Frederic Gibson was born in Surrey, England in 1920. His father was an Irishman from Dublin. His mother was brought up in New York, her father having moved from Paris to the United States as a young man. "Probably something about the mixed heritage encouraged the telling of stories,"; Gibson said. "Also, I had one uncle who wrote books in Gaelic and another who wrote in French. My father wrote an account of his adventures in the Boer War. It seemed the most natural thing in the world to record my experiences and observations."; Gibson was educated in England. "One of my teachers was T.H. White who gave me valuable advice about the way thoughts can be turned into prose."; He left school for a year to sail with a crew of four, from Sweden to Australia and back, finishing his journey shortly before the outbreak of World War II. He included an account of his voyage in a book of memoirs. He spent the war years in the Royal Navy, primarily in the submarine service. His first book, Dark Seas Above: A Submariner's Notebook, was published in 1947, followed by Memory Bay, a collection of essays on travel between Lapland and Cape Horn. He worked for a literary agency in London and for Twentieth Century Fox in the company's European story department. A year later, he and his wife Lorna moved from London to the west coast of Cornwall, where he wrote two novels set in the new locale: The Bright and the Dark, and The Heart of the Street. He also produced a two-volume definitive history of the Brocklebanks Shipping Company in 1953. John Frederick Gibson and his wife began living in Campbell River in 1980.

Creekstone Press of Smithers re-issued A Small and Charming World in 2001. "I have never been what I might call a professional writer,"; he said. "Over many years there have been some occasions which seemed to justify a book. Not many... I share most writers' hopes: Perhaps it was all worth while.";

Review of the author's work by BC Studies:
A Small and Charming World