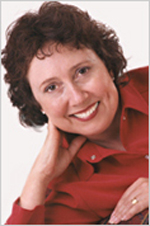 
Born in Edmonton on July 28, 1951, Katherine Gibson is an educator, speaker, and writer with publishing credits in North American and abroad. These include Reader's Digest (U.S. Canada, Australia), Saveur magazine, Northwest Palate, Globe & Mail and Toronto Star, Homemaker's magazine, Airlines magazine, Victoria Times Colonist, and others. She earned a Bachelor of Education degree from the University of Alberta, and then taught in Edmonton, specializing in teaching gifted children. She came to B.C. in 1986 where she earned a Master of Education degree from the University of Victoria. She has taught writing courses at the Western Academy of Photography and the University of Victoria. She has also been the Vice President of the Victoria Conservatory of Music and on the National Board of the Periodical Writers Association of Canada. As a keen cyclist, she initiated Victoria's Bike To Work Week and was involved in the promotion of the Trans Canada Trail, a national millennium project. This led to a career change to become a media relations consultant, a job she enjoyed until 2000, when she turned to writing full-time.

Unclutter Your Life: Transforming Your Physical, Mental and emotional Space (Beyond Word Publishing, 2004)

Pause: Putting the Brakes on a Runaway Life (Insomniac Press, 2006)