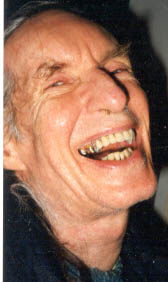 
Gerry Gilbert was conceived in Toronto and born in Calgary on April 7, 1936, on the way to Vancouver. He was a noteworthy catalyst for poetry and writing in Vancouver from the 1960s. "For many years," wrote reviewer Jamie Reid in 1992, "he lived in a tiny two-storey cottage not much larger than a child's play house sequestered in the lane behind a Powell Street restaurant, half a block from Oppenheimer Park in Vancouver's Downtown East Side... Gilbert is legendary among the other poets of the city as the poet who rides a bicycle, a kind of Hermes on two wheels." He has been dubbed Canada's best street poet by another reviewer--as well as 'the Jude the Obscure of the Vancouver poetry scene' by filmmaker Tom Shandel.

Gilbert had primary education in Prince Rupert, Victoria, Vancouver and Toronto. He attended secondary school in Vancouver. He went to UBC (1954-1956) and also lived in Montreal for six months and visited Europe for extended periods four times. His experiences in the arts were varied. He worked as a propsman, stage manager and studio director for theatre and TV; he made many videos, he was a photographer and he studied pottery. His books include the large collection, Moby Jane, and prior titles such as From Next Spring, Grounds, Journals to the East, Skies, Lease, Phone Book and White Lunch.

Gilbert could be chiefly remembered for producing the writing anthology magazine called B.C. Monthly. B.C. Monthly changed formats several times since its inception in 1972. He published 48 issues between 1972 and 1978. "The magazines basically functions for the people who read it," he wrote in 1978. "I've sold 300 copies of #15 & about 50 have gone free to contributors and reviewers. There's a few copies left--but this issue will be out of print soon, along with most of the earlier issues... I sold 20 copies in 20 hours standing outside the Library at Burrard & Robson during the hot spell last summer; & there were more winners amongst BCM buyers than among those who bought lottery tickets there then. I'm not much of a businessman, but I try to make BCM pay for itself. Victor Coleman called me "the best writer in the country" -- not the 'greatest'. He must have been referring to my typing; my handwriting isn't very good."

Gerry Gilbert's daughter wrote a non-fiction book describing her struggles to countenance alleged sexual abuse by her father prior to her suicide. Carole Itter, mother of Lara Gilbert, published an edited version of her daughter's confessional journals, I Might Be Nothing: Journal Writing (Trafford, 2004), in which her daughter describes feelings of intense anguish over an eight-year period prior taking her own life in 1996. A gifted student who excelled in pharmacology at UBC, Lara Gilbert experimented with prostitution and drug abuse while attempting to come to terms with her recollections of alleged incest in her journal.

Articles: 2 Articles for this author
“I’ve used up my reality”
Obituary Notice

Gerry, poet, moved into the past tense Friday in Vancouver after a lifetime dedicated to writing, photography and art. He will be greatly missed by his son Jeremy in Toronto and daughter Tamsin Bragg (Ritchie) in Saltspring Island, and by his grandchildren Cassandra and Drew Storey in Saltspring, and Matilda in Toronto. Gerry waspre-deceased by his daughter Lara, sister Linda, and parents Ralph and Betty, all of Vancouver. Gerry, once called the "Jude the Obscure of the Vancouver poetry scene," published many books of poetry and prose, including "Moby Jane," "Grounds" and "Azure Blues" and was for many years host of "radiofreerainforest" on Co-op radio. He published "BC Monthly," a writing journal, and had numerous photographic and audio-visual exhibitions. Through BC Monthly and radiofreerainforest, he was the most active of all the poets in the Vancouver poetry community in promoting and supporting the work of other poets from all the many groups and schools in the city. He lived for the last 40 years in and around Vancouver's Downtown East Side, subsisting on his writing. His family would like to extend their gratitude to Marlene Swidzinsky and James Campbell, Jamie and Carol Reid, and the staff of St. Paul's Hospital palliative ward. Gerry's ashes will be spread over the waters by Jericho Beach, to join his family there who preceded him.

-- As first appeared in the Vancouver Sun / Province


FROM PRESENTATION HOUSE IN NORTH VANCOUVER

Please join us for the Opening Reception for B.C. Almanac(h) C-B, Friday, October 2 at 7 pm, artists in attendance


B.C. Almanac(h) C-B brings to light a multimedia project that was originally commissioned in 1970 by the Stills Division of the National Film Board of Canada. The project features a reissued anthology of photographic bookworks and accompanying exhibition, as well as works from the period by artists included in the book. Fifteen artists, filmmakers and writers - many using cameras for the first time - were invited to produce photographic bookworks that were then compiled into a 472-page anthology. Participants included multimedia artists and photographers Jack Dale, Michael de Courcy, Christos Dikeakos, Judith Eglington, Gerry Gilbert, Roy Kiyooka, Glenn Lewis, Taras Masciuch, NE Thing Co. Ltd., Michael Morris, Jone Pane, Timothy Porter, Peter Thomas, Vincent Trasov, and Robertson Wood. The book itself was designed as an exhibition and the exhibition was conceived as a three-dimensional multimedia version about the production of the book, complete with walls painted greyscale. BC Almanac(h) C-B highlights the experimental ethos of artist book production as well as radical new approaches to the circulation of print culture through mass media. In the spirit of the era, the vibrant experimental art scene on the westcoast embraced new ideas about the potential of communication in the electronic information age and new camera technology, the artists were exploring new camera technology and ideas about communication in the electronic information age.