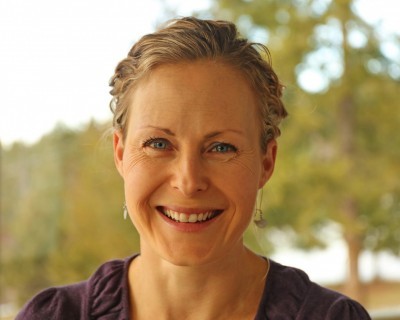 
After Kerry Gilbert won the Gwendolyn MacEwen Poetry Award for Best Suite by an Emerging Writer 2016/2017, her suite of poems served as the core of a verse manuscript called Little Red (Mother Tongue Publishing 2019). It's a contemporary response to the classic Red Riding Hood fairy tale, fully cognizant of the missing and murdered women in Canada. Gilbert explores deeply entrenched lessons in gender roles with poetry about Wolf, Nana, Scarlet, the Woodcutter, bear, the forest, lost and innocent children, crows, accidents and homelessness "creating a kaleidoscope of modern cautionary tales." The intention is to encourage readers to find new ways to navigate the forest with hope instead of fear.

Vernon-raised Kerry Gilbert grew up in the Okanagan and has lived on Vancouver Island, in South Korea, and in Australia. She now lives back in the valley, where she teaches Creative Writing at Okanagan College and raises her three children.

Gilbert's first book of poetry, (kerplnk): a verse novel of development, was published in 2005 by Kalamalka Press. It was followed by a collection of prose poems, Tight Wire (Mother Tongue 2016), the cover of which features an act of tightrope walking known as funambulism. "The theme of 'life is circus' surfaced," she told the Vernon Star, "and the beautifully grotesque images of 'trying to balance it all' fit perfectly." One of the first lines in Tight Wire reads: "funambulism. barefoot-no leather soled slippers. her big and second toe cut deep in between by braided tight wire. no props-just freehand." Interviewed by Kristin Froneman, Gilbert referenced the documentary Miss Representation in which Jennifer Pozner says women these days are: "expected to look like Miss U.S.A., have sex like Samantha on Sex and the City and think like June Cleaver." Tight Wire was shortlisted for the ReLit Prize in 2017.


Three of Kerry's poems made the long list for the 2017-2018 Ralph Gustafson Prize for the Best Poem (The Fiddlehead's 27th annual contest). She is co-founder of Spoke Literary Festival, https://spokefestival.com/, a celebration of writers in and around the Okanagan. She also runs writing workshops for teens, called Story Makers https://thestorymakers.ca/. Story Makers is a mentorship program that helps young writers find their voice and confidence.