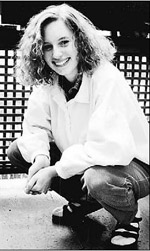 
"I Might Be Nothing is a powerful account of a young girl's infinite promise, dashed." -- Rebecca Wigod, Vancouver Sun

Carole Itter, mother of Lara Gilbert, has published an edited version of her daughter's confessional journals, I Might Be Nothing: Journal Writing (Trafford, $26.50 2004), in which her daughter describes feelings of intense anguish over an eight-year period prior to her suicide in 1996. A gifted student who excelled in pharmacology at UBC, Lara Gilbert experimented with prostitution and drug abuse while attempting to come to terms with her recollections of alleged incest in her journal. As a child and teen she sometimes retreated into her own imaginary world called Kawiakee but she couldn't escape from her struggles with self-worth.