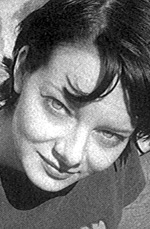 
Rebecca Godfrey's Toronto home 'harboured Ghanian jazz musicians, radical nationalists, draft dodgers and an undercover FBI agent.' At age nine she moved to Victoria with her father, House of Anansi founder Dave Godfrey, and her mother, mystery writer Ellen Godfrey. She attended Mount Douglas High in Saanich, before moving to attend the University of Toronto. She received a Creative Writing MFA from Sarah Lawrence College. Her first novel The Torn Skirt (HarperFlamingo, 2001) is about a sheltered teenager, exposed to the Victoria underworld. In the late 1990s Godfrey moved to New York City where has been a freelance journalist, and has worked in film and publishing. She investigated the beating death of 14-year-old Reena Virk of Victoria for Under the Bridge: The True Story of the Murder of Reena Virk (HarperCollins, 2005), a non-fiction investigation of the various characters involved in the story. It received the second annual $25,000 British Columbia Award for Canadian Non-Fiction in 2006, among the largest non-fiction prizes in Canada, and the only national prize to originate in British Columbia.

Articles: 2 Articles for this author
The Torn Skirt
promotional material


Sara's world is circa 1984, Victoria, B.C., Canada's prettiest city. But over at Mt. Douglas (a.k.a. Mt.Drug)High, all the girls have feathered hair, and the sweet scent of Love's Baby Soft can't hide the musk of raw teenage anger, apathy and desire. Sara longs to leave her stoner boyfriend and pothead father -- maybe she could move to New York and become a model, like the glossy, good girls in fashion magazines. But her only salvation comes in the willowy form of the mysterious Justine -- the girl in the torn skirt. Pulled by this spectral figure, Sara sets off on a feverish, frenetic odyssey into Victoria's underworld of hookers and johns, junkies and thieves, runaway girls and skater boys, and ultimately a violent tragedy. -- HarperCollins


Murder mystery novelist Ellen Godfrey won an Edgar Allan Poe Mystery Writers of America special award for true crime after writing By Reason of Doubt (Clarke, Irwin, 1981), her coverage of the Swiss trial of a UBC professor named Cyril Belshaw, a renowned anthropologist, who was accused of murdering his wife in Switzerland and leaving her body in a ravine. Fast forward 14 years and Rebecca Godfrey, her daughter, has followed a first novel, The Torn Skirt, with a true crime investigation of a brutal crime and its aftermath in which a group of teenagers were accused of leaving their victim's body under a bridge. Rebecca Godfrey, now a New York-based journalist, has profiled the various characters involved in the beating death of 14-year-old Reena Virk of Victoria on November 14, 1997, for Under the Bridge: The True Story of the Murder of Reena Virk (HarperCollins, $32.95). Godfrey attended the trials of Kelly Ellard and she interviewed Warren Glowatski, both convicted in the case. 0002000679