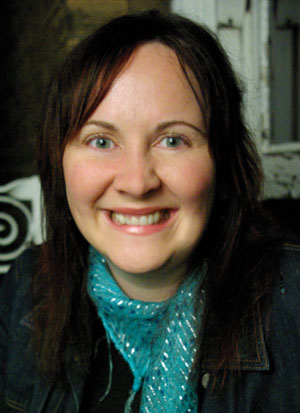 
Christy Goerzen of Vancouver has followed her kidlit novel Explore (Orca Currents, 2009) with Farmed Out (Orca Currents, 2011), in which 15-year-old Maddie is hoping to realize her dream of visiting New York by winning first prize in a drawing contest, only to have her hopes detoured by her mother's plans for a mother-daughter adventure in organic gardening.

Christy Goerzen's third book, The Big Apple Effect (Orca $9.95) finds Maddie realizing her lifelong dream of visiting New York City. Maddie launches an epic quest for the ultimate art show outfit and drags her friends, Anna and Thomas along oblivious to the fact they don't share her passion for vintage clothes. When Maddie's hippy mom joins them and takes centre stage, it threatens to derail Maddie's plans. Tempers flare and Maddie must examine the ugly facts of how she treats her friends.

Christy Goerzen has a Master of Arts in Children's Literature from UBC.

Articles: 1 Article for this author
Farmed Out by Christy Goerzen (Orca $9.95)
Review


In farmed out by christy Goerzen, Maddy's mom's idea of adventure, not to mention a dose of mother-daughter bonding, is a week on an organic farm feeding goats, mucking out stalls and braiding garlic.

"You've never felt earth between your fingers,"; she trills. Maddy, fifteen-year-old city girl that she is, would prefer to keep it like that and stay "as far away from manure as possible.";

Her big plan is to use the remaining summer vacation to come up with the winning entry in an art magazine contest and nab first prize. That's her idea of adventure-a one-week all-expenses paid trip to New York City with passes to all the art galleries and her artwork on the magazine's cover.

"We'll be VOF-ers,"; her mother adds--referring to Volunteer Organic Farmworkers. Maddy barely has time to pack her treasured Andy Warhol t-shirt before they're rattling off to the Okanagan Valley in an ancient Dodge Colt her mother calls Dave.

Pressed into service as a Volunteer Organic Farmworker ("only"; four hours a day), Maddy finds herself stuck with her
flaky, tarot-card-reading, pink-unitard-clad mother, the husband-and-wife farm owners who remind her of the "creepy"; painting, American Gothic, and their hostile daughter, Anna. Plus there's no cell phone service. But the grub-plum jam, fresh eggs, homemade bread-is amazing and, as it turns out, the daughter isn't so bad after all.
Anna can't stand hippies either.

Maddy's been dragged to enough Wild Women Weekends that she's come up with what she calls the DDP factor-drums, dreadlocks and patchouli. "DDP! That totally describes the volunteers,"; Anna cries, and with their mutual scorn she and Maddy begin to warm to each other.

Meanwhile, Maddy's vegetarian mother has discovered the goats she's thoughtfully named (she names everything) are meat animals destined for a short appearance on various restaurant menus and she's ready to call it quits. But Maddy's just realized Frida Cowlo, Anna's beloved prize-winning uni-browed 4-H Jersey, could be her ticket to the Big Apple. No one else would think to submit a portrait of a cow.

When the inspirational cow suddenly dies, Maddy makes one of the biggest sacrifices of her young life. She leaves behind her finished, certain-to-win portrait for a grieving Anna and, with it, any chance to make the deadline for the contest. On the Friday before school starts, though, Maddy gets a startling surprise in the mail.

Farmed Out is Christy Goerzen's second book for reluctant readers in the Orca Current series. Her first, Explore, deals with a troubled teen who chooses an outdoor adventure rehab program over juvenile detention. Past occupations for Goerzen, a library communications manager, include book reviewer, television writer and bookseller. 978-1-55469-910-0