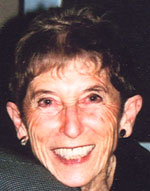 
Marketa Goetz-Stankiewicz, a UBC professor of Comparative Literature, is a friend of former Czech president Vaclav Havel. While Havel was imprisoned by the Communist Party she edited The Vanek Plays, Four Authors, One Character (UBC Press 1987), which featured Havel's fictional Ferdinand Vanek as a dissident playwright. Born in Czechoslovakia in 1927, she also wrote The Silenced Theatre: Czech Playwrights Without A Stage and Critical Essays on Vaclav Havel (G.K. Hall, 1999).

On a lovely sunny Fall day in October 2011 in Prague, I wrote the following note for a Czech journal Tyden ('The Week') that had a special issue on Vaclav Havel's 75th birthday. Little did I know this birthday greeting to my friend was to be my last.

"Dear Vasek [diminutive for Vaclav],
The first Becherovka of my life I drank with you in September 1978. It was in Hradecek [his summer house] and it seemed to me like a dream. You said then that I should come back in a couple of days with my mother, and you would make us scrambled eggs with fresh mushrooms.
"As it turned out, this did not happen. The police stopped us in front of Hradecek. We both played the roles of slightly stupid tourists, who totally mixed up a detour and had no idea where they were.
"You have been with me from 1978 onward and enriched my life in so many directions that I have no words for it. So, just simply in the Canadian way, HAPPY BIRTHDAY, VASEK!"

Thirty-four years later, as the plane carried me from Frankfurt to Prague, I was late for the main memorial for the country's ex-president in St.Vitus Cathedral at the Hradcany Castle. With a grey feeling of unreality I dragged my take-on suitcase to the Exit at the airport. There I could hardly believe my eyes. A man was holding up a sign that said "Marketa.";

The grey feeling gradually evaporated as I was driven to the Prague crematorium where a less official memorial for friends was to take place. Still there was a crowd outside. Darkness was falling but the evening was illuminated by hundreds of candles.
Inside, people brought flowers and stopped by the small coffin that was raised above the crowd. Friends stepped forward, one by one, and spoke about how Vaclav had affected their lives.
There was a powerful choir and classical music-some of it Czech-but this gathering was also punctuated by silence as a deep sense of irreparable loss filled the air.

A few days earlier, television screens around the globe showed hundreds of thousands of Czechs moving slowly, following the car bearing Havel's casket across the ancient Charles Bridge to the Castle where, twenty-two years earlier, a youthful dissident playwright had been catapulted into the presidency by - in this case - the benevolent storms of historical change.

Vaclav Havel wrote a new Constitution, reopened the Castle Gardens inaccessible to the public for many decades, and re-established a democratic government after more than four decades of totalitarian rule. The latter work, of course, encountered many difficulties and proceeded only gradually.

Freedom, so passionately yearned for by multitudes everywhere in the world, imposes a heavy burden of responsibility on those who fight for it, then struggle to maintain it. In the case of Havel, he sacrificed some of himself as a writer in order to serve his people as a politician.

When still a persecuted "dissident"; whose writings were banned in his own country, Havel had come to worldwide attention through his essays: "The Power of the Powerless"; (1978), "Politics and Conscience"; (1984), and his Letters to Olga, written from prison between 1979 and 1982.

His plays, including The Vanek Plays (published by UBC Press in 1987) and the formidable Faust play Temptation, were produced in many countries.

Literature always infused him with wisdom and courage. As President, Havel travelled the world, giving speeches on five continents, talking (in the words of his English translator Paul Wilson, a Canadian) "about Godot and political patience to the French, about Ghandi and non-violence to the Indians, [and] about Kafka and self-doubt to the Israelis.";

Vaclav Havel wrote all his presidential speeches himself. He claimed that this writing kept him sane on the job "because it is really one of the more creative aspects of being president."; So it was he made the name of his small country, the Czech Republic, crushed for centuries on that restless crossroads at the centre of Europe, internationally known and respected.
All this is doubtless generally familiar to literate people, but it seems only fitting at the time of his death to renew publicly our homage to this man whose moral courage had an extraordinary national and international impact.

During those days in Prague that were darkened by the loss of a unique man, I again became acutely aware of the perennial contradictions that seemed engrained in Vaclav Havel's life.
While basically shy and entirely free of political posturing, he was yet able to address huge gatherings and keep their undivided attention; he was deeply sincere, yet had an ironic detachment from events; while capable of genuine self-depreciation, he was unbendable when a basic value was at stake; he preserved a sustained sense of humour even during the gravest situations, and having lived through decades of harassment and persecution, he claimed he was incapable of hatred.

Now, as I grope for the mysteries of his personality, I must refrain from becoming emotional (a quality abhorred by the Czech character, and Vaclav himself). So I will end with this reminiscence of Havel by noting his connection with Vancouver-where his plays were published in English.

The Czech-born novelist Jan Drabek lives here, and I have translated some of his plays, but Havel also had a persistent curiosity about the city itself. Havel had been planning to come to Vancouver to participate in a panel that also included the Dalai Lama and Bishop Tutu but his doctor forbade him to do so due to his frail health.

Although several of his plays have been performed here (and reviewed by BC BookWorld's publisher), he himself never managed a visit. Still he maintained a deeply felt connection to Canada.

For many years, Vaclav Havel loved to wear a T-shirt I sent him that said 'VANCOUVER MILUJE VA?KA' ('Vancouver loves Vaclav'). It is a joyful thought that this amazing man liked to show, with a twinkle in his eye, the loving note on his chest that displayed the affection of a Canadian city. While mourning his loss, I remind myself of the T-shirt, and smile.

I particularly cherish a photo of Havel in his Vancouver T-shirt in 1984, a short time after he came out of prison. He is carrying a sack of potatoes, clearly not at his best. Others show him wearing it earlier, in the garden of his country home where friends and dissidents met and discussed philosophy, literature and politics.
BCBW