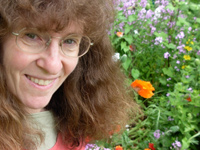 
Born in Oregon in 1954, where she grew up, Kim Goldberg earned a Biology degree from the University of Oregon. She has explored Vancouver Island as a hiker, birdwatcher, and amateur naturalist. As a program coordinator for community access TV in Nanaimo, she wrote an analysis of Canadian cable television as a catalyst for change, The Barefoot Channel: Community Television as a Tool for Social Change (New Star, 1990). Her Submarine Dead Ahead! (Harbour, 1991) is a history of the Nanoose Conversion Campaign, a grassroots Vancouver Island peace group seeking to eliminate the U.S. Navy's nuclear presence at Nanoose Bay. Her other books include Waging Peace in America's Nuclear Colony, Vox Populi: Getting Your Ethnic Group on Community TV and Where to See Wildlife on Vancouver Island (Harbour, 1997). Her many articles have appeared in BBC Wildlife Magazine, This Magazine, Earthkeeper, Macleans, Canadian Geographic and the Vancouver Sun.

Using the 66-move sequence of a little-known martial art of Taoism called Liuhebafa, which she began studying in 1998, Kim Goldberg frames her poetic explorations of the Taoist code for Ride Backwards on Dragon: A Poet's Journey through Liuhebafa (Leaf Press, 2007). Along the way we learn Liuhebafa emanated from a philosopher and mathematician in north-central China, approximately 900 A.D., whose ideas were developed by a scholar and martial artist named Li Dongfeng some 300 years later. "I am no authority on Taoist metaphysics or Liuhebafa or the Chinese language," writes Goldberg. "I am naught but a beginner in all things and hope to stay that way--open." Her frank poetic narratives frequently detour towards humour. "Dear Ovaries, It was great seeing you guys last week! And that trans-vaginal ultrasound was quite the thrill ride. Thanks. But what were you thinking going all cysty like that on the right? You two are a real laugh riot. Have I not been good to you? Shown you respect? Attended every stitch-n-bitch session? Vowed to steer clear of Hormone Replacement Therapy no matter how sweaty I get? / You're not still mad about that no-kids thing are you? Like dudes, get over it already! There's more to life than biology." $18.95 978-0-9783879-1-4

In 2008, Goldberg's comedic pamphlet about the adventures of an empty beer can in Nanaimo's delapidated downtown core, The Dude Chronicles #1, was printed on a colour photocopier at Staples in a limited run of 50 signed and numbered copies, from her own imprint called Pig Squash Press. Having spent three years photographing and writing about Nanaimo's back alleys, graffiti, underpasses and other homeless encampments, she self-published Red Zone (Pig Squash $18.95), to draw attention to the city's approximately 300 homeless citizens who are barred from sleeping in a 40-block area of the city known as the Red Zone. "There are huge unaddressed issues of civil liberties and constitutionality around 'red zones,'" wrote Goldberg in November of 2009. "To my knowledge, the BC Civil Liberties Association has not yet involved itself in this - at least not in any publicized legal challenge. Why not?"

For forty years Kim Goldberg never told anyone she had Hepatitis C. She railed against doctors and Big Pharma. Then she was completely cured, at no cost, during clinical trials conducted for a drug called Harvoni, developed by Gilead Sciences Inc., with a wholesale price of $1,125 per pill. We learn from her memoir Undetectable (Pig Squash Press $19) that approximately 250,000 people live with chronic Hepatitis C in Canada, often furtively. "The way to end the stigma is to normalize discussion about Hepatitis C," she says, "the same way we openly discuss cancer or diabetes." Goldberg's account of her healing uses the Japanese literary style called haibun--a travel diary paired with haiku--after she was inspired by reading Matsuo Basho's Narrow Road to the Interior.

Articles: 1 Article for this author
Canada in Submarine Dead Ahead (Harbour $14.95)
Article


EACH YEAR THE NANOOSE PEACE MARCH draws 200-400 people in an ongoing campaign to convert the Nanoose military facility, located 25 kilometres north of Nanaimo, to peaceful purposes. Die-ins, blockades, petitions and a tent city alongside the Island Highway are some of the other tactics that have been employed by the Nanoose Conversion Campaign to protest U.S. warships using Canadian waters for manoeuvres. Kim Goldberg recounts the protesters' seven-year struggle and the naval base's implications for Canada in Submarine Dead Ahead (Harbour $14.95). Goldberg, a Nanaimo journalist, explains why she believes Nanoose is harbouring nuclear-capable submarines. "Canada's status as a nuclear colony," she says, "is one of the reasons we were drawn into the Persian Gulf War and why we could again be drawn into an American military conflict overseas." 1-55017-052--X