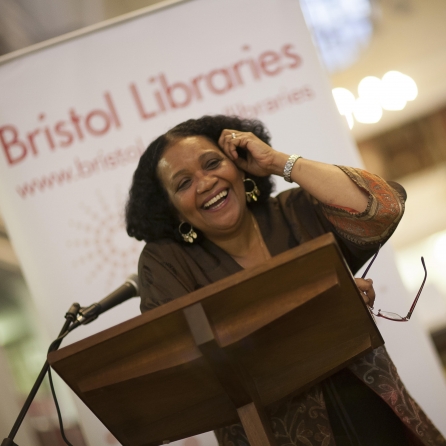 
Lorna Goodison of Halfmoon Bay was installed in her new position as Poet Laureate of Jamaica for a three-year term during a ceremony at King's House in St. Andrew, Jamaica on May 17, 2017. According to the National Library of Jamaica, Goodison was selected by a secret ballot vote conducted by the Poet Laureate Committee.

In 2018, the director of the Windham-Campbell Prizes made the call of a lifetime to eight entirely surprised writers, informing them that they will each be recognized with a $165,000 USD prize to support their writing--and Lorna Goodison was one of those writers. The awards, worth more than $1 million annually, are conferred each September at an international literary festival at Yale, where the Prizes are based. These literary awards were established in 2013 with a gift from the late Donald Windham in memory of his partner of 40 years, Sandy M. Campbell.

Lorna Goodison is the author of two collections of short stories, eight books of poetry, and the award-winning memoir From Harvey River: A Memoir of My Mother and Her People. She has received much international recognition, including the Musgrave Gold Medal.

Born in Jamaica, Goodison has taught at the University of Toronto and the University of Michigan. She divides her time between Ann Arbor, Toronto, and Halfmoon Bay, British Columbia where she resides with her husband Ted Chamberlin. Her 2011 story collection is By Love Possessed (M&S $28.99) 978-0-7710-3577-7

In 2019, Lorna Goodison learned she was awarded the annual Queen?s Gold Medal for Poetry, established in 1933, originally for citizens of the UK and then expanded in 1985 to include the Commonwealth. The award is to be presented to Lorna Goodison by Queen Elizabeth II at Buckingham Palace. Lorna is the first Jamaican, and the first Canadian, to receive this award.