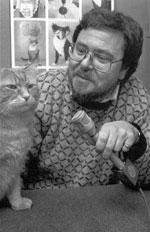 
Food, wine and music writer Jurgen Gothe was born in Berlin in 1944, raised in Medicine Hat from the age of nine and has long served as the host of CBC-FM's Disc Drive which offers a pot pourri of mostly classical music. A widely published restaurant and wine critic, he recommended 91 Vancouver restaurants in First Rate: Jurgen Gothe's Favourite Vancouver Restaurants (Brighouse, 1989) and has also published Good Gothe (Stoddart, 1990) which collects 'the enthusiasms of an airwave connoisseur.' In 2005, he published DiscCookery: The DiscDrive 20th Anniversary Cookbook (Firefly, 2005) and provided an introduction to La Regalade: Simple French Bistro Food at Home, with chef Alain Raye (Firefly, 2005) of West Vancouver.