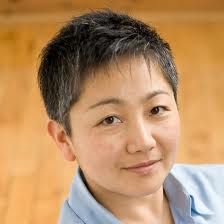 
Born in Chiba-ken, Japan in 1966, Hiromi Goto of Burnaby immigrated at age three. She lived on the West Coast for eight years; two years in Surrey, a summer in White Rock and the rest of the time in Langley. She moved to Nanton, Alberta where her father realized his ambition to operate a mushroom farm. Growing up she was influenced by the stories of Japan and Japanese culture told to her by both her grandmother and father. Goto attended the University of Calgary, graduating with a B.A. in 1989.

Hiromi Goto's first novel, Chorus of Mushrooms (1994), received the Commonwealth Writers' Prize for Best First Book in the Caribbean and Canada region and was co-winner of the Canada-Japan Book Award. It's about three women in the same family in Nanton. The grandmother came to Canada at age 54 having survived a loveless marriage and the firebombing of Japan during World War II. Her daughter rejects traditional Japanese culture in order to integrate in a new society, changing her name to Kay. She marries a Japanese Canadian mushroom grower and they have a daughter who forges her own identity between the two older female forces.

Goto's second novel, The Kappa Child (2001), was a finalist for the Commonwealth Writers' Prize for Best Regional Book, and was awarded the James Tiptree Jr. Memorial Award. The title refers to a creature in Japanese folk tales called the kappa, with a frog's body, a turtle's shell and a bowl-shaped head that holds water. The novel mixes science fiction, fantasy and Japanese mythology. This blending of genres mirrors Goto's interest in gender blending. Goto's first young adult novel, The Water of Possibility, was published in the same year.

The title story of Goto's collection of stories, Hopeful Monsters (Arsenal $19.95 2004), is derived from a paper by Wendy Pearson called "Sex/uality and the Hermaphrodite in Science Fiction, or, The Revenge of Herculine Barbin" from a book called Edging into the Future: Science Fiction and Contemporary Cultural Transformation (University of Pennsylvania Press, 2004). It is not directly derivative of Nicholas Mosley's novel Hopeful Monsters. The collection in general is concerned with transformation and adaptation. The hopeful monsters, according to press material, "are women who will not be tethered by familial duty or the ghosts of the past."

Partly written during Goto's 2007 Writer in Residency stint at the Vancouver Public Library, her YA/Crossover novel, Half World (2009), was long-listed for the IMPAC Dublin Literary Award and received the 2010 Sunburst Award and the Carl Brandon Society Parallax Award. Half World is described as an epic gender-bending fantasy about a lonely, overweight only child of a loving but neglectful mother who is lured back to "Half World" by the vindictive Mr. Glueskin. The heroine Melanie Tamaki must save her parents and protect the future of the universe in the bargain.

A long poem, co-written with David Bateman, also appeared in 2009. Wait Until Late Afternoon is her first book-length poetry publication.

Darkest Light, a companion novel to Half World, was the first book released under the new Razorbill Imprint of Penguin Canada.

In honour of its 20th anniversary, NeWest Press released a special edition of her seminal Chorus of Mushrooms in the spring of 2014.

A self-described feminist, Hiromi is a writing instructor, editor and the mother of two.

Ms. Goto begins her tenure, which continues until early 2008, Ms. Goto will
divide her time between her own writing projects and sharing her experience
with the community through a variety of activities including readings,
workshops and mentoring emerging writers.

Now in its third year, the VPL Writer-in-Residence Program promotes writing
and reaches out to communities not typically exposed to Canadian
literature. In the case of Ms. Goto's residency, this will include
working with women in immigrant communities and young adults. While at
VPL, she will also be working on a new novel as well as two book-length
poetry projects and editing her next young adult novel, Half World.

For a portion of her term, the Writer-in-Residence will also be available
to mentor individuals. Developing writers may request an appointment with
Hiromi Goto by contacting VPL Community Relations at 604-331-4041 or
programs@vpl.ca. Please note, writers will be asked to submit a five-page
sample of their manuscript prior to the appointment being made.

The 2007 VPL Writer-in-Residence Program is made possible by financial
support from the Canada Council for the Arts and the Friends of the
Vancouver Public Library. For more information about the program, please
contact your local library or visit http://www.vpl.ca/MDC/writer.html.

Founded in 1869, the Vancouver Public Library is one of Canada's largest
library systems, dedicated to meeting the lifelong learning, reading,
recreation, and information needs of the people of Vancouver. Each year,
the Library's 22 branches serve over 370,000 patrons, offer over 2.5
million items and countless online resources to the public and answer more
than one million reference questions. In 2006, a record 10 million items
were circulated.