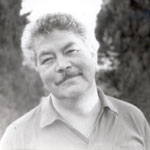 
Born in Turner Valley, Alberta on February 26, 1936, Edwin Orrin Gould died in Vancouver General Hospital on April 13, 2001. He graduated from Semiahmoo High School in White Rock, attended UBC and UVic, and wrote his first book when he was living on Saltspring Island. He worked as a reporter and editor and 'Swivel Servant' prior to turning to publishing and writing for his living. Specifically, he worked for three years as the Information Officer for Deputy Premier and Human Resources Minister Grace McCarthy. Mainly published by Hancock House in the 1970s, Gould is most widely known for his often-reprinted biography Ralph Edwards of Lonesome Lake (1979) and his commercially successful Logging: British Columbia Logging History (1975).

In 1977, he wrote The Lighthouse Philisopher, a biography of Bill Scott, a British-born lighthouse worker who lived in Victoria, B.C. During work overseas in China, Scott was incarcerated into a Japanese internment camp at the beginning of World War II. After the war, Scott ended up in B.C. where he became an activist for many causes, often delivering speeches on top of soap boxes. "I have spent all my life so far unlearning the nonsense I was taught in school," Scott once wrote. "In many ways I consider myself fortunate not to have had a great deal of useless education and to use the world as my university. With less to clutter it, I have been able to use by brain to think with--and to take a detached view of what is going on around me."

Gould married Dolores Noel-Bentley in 1980 and served as president of the Canadian Authors Association. For his book Ranching, Gould was charged with plagiarism by the author of a doctoral thesis entitled "The Canadian West and Ranching Frontier, 1875-1922". The case took six years for the issue to reach trial, during which time Gould suffered a series of heart attacks and required open heart surgery. A permanent injunction was granted in 1985; sales of the book were restricted. In the 1980s Gould managed his own Cappis Press and ghosted several books.