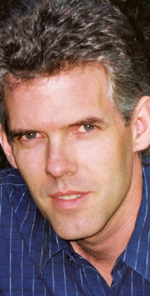 
John Gould is the author of several collections of very short stories.

When Kilter (Turnstone 2003) was published, Gould was the Executive Director of the Victoria School of Writing. He also taught in the Writing Department at the University of Victoria and he served on the editorial board of the Malahat Review.

According to publicity materials, his first novel, Seven Good Reasons Not to Be Good (HarperCollins), "opens with a cryptic postcard from 40-something Matt to his oldest friend, Zane. Zane is dying 'for good' -- but Matt's heading home to talk him out of it. And so it goes in John Gould's first novel, which treats mortality, morality, and modernity with equal parts empathy and wit in the manner of Jonathan Letham and Zadie Smith."

EMPLOYMENT OTHER THAN WRITING: Arts administrator and part-time writing teacher at the University of Victoria.

Seven Good Reasons Not to Be Good (HarperCollins, 2010)


With a background as an arts administrator, tree planter, house framer and haiku enthusiast, John Gould has cobbled together 55 short pieces of diverse, experimental fiction for Kilter (Turnstone $16.95).

He cites six aspects of fiction highlighted by Italo Calvino in Six Memos for the Next Millennium, a final book based on talks Calvino gave near the end of his life-lightness, quickness, exactitude, visibility, multiplicity and consistency-as the qualities to exhibit in what he calls his 'flash fiction.'

"Ten years ago I was writing conventional short stories, but I was also clowning around with haiku. I loved the subtlety and lightness of the haiku, its tendency to irony and understatement, its openness to paradox. So I asked myself, if haiku is the most succinct of poetic forms, what's the parallel form of prose?

"With Kilter, I feel like I'm getting somewhere. My father is a mathematician and my mother is an English teacher, descended from a long line of journalists, so I think I've inherited a passion for abstract thought, for concise, elegant formulations, and at the same time a passion for the concrete. Fiction is the only form in which I can imagine dovetailing these two aspects of my temperament.";

Gould co-created and ran the 'otherwords' writing program for the BC Festival of the Arts. When that Festival was axed, he became executive director of the Victoria School of Writing. His first two collections of short fictional pieces were a chapbook from Reference West called Misterioso and The Kingdom of Heaven: Eighty-Eight Palm-of-the-Hand-Stories from Ekstasis.
"The big ideas that fascinate me tend to crop up where philosophy and psychology and theology get all tangled up together. I'm intrigued by the whole mess of processes people use to resolve the polarities and paradoxes that crop up in our lives. Loss is one of the experiences that highlights the human conundrum and laughter is one authentic response. So in my work, I'm big on those two things.";